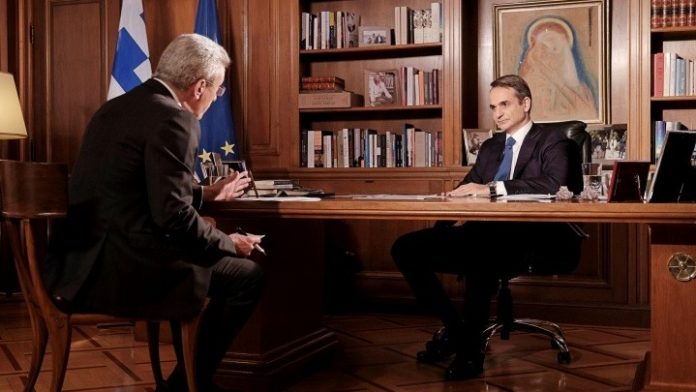 Prime Minister Kyriakos Mitsotakis spoke of the logistics of managing an extensive vaccination program, expressed his optimism that Greece and Turkey will improve relations, and said that the government has no intention of calling snap elections in 2021, in a televised interview to Nikos Chatzinikolaou for ANT1 .

“Greece has managed better than other European countries” in the pandemic, the prime minister said, while rejecting criticism that the government had not prepared well enough for the second novel coronavirus wave, calling it “a lot more violent than the first one.” He also rejected criticism of main opposition SYRIZA on the number of deaths from Covid-19, and limited his comments to saying that “what we see in Greece is not main opposition – it’s a disappointment.”

Speaking of the EU’s purchase of vaccinations on behalf of its member states, Mitsotakis said, “From the very start, Greece adapted and participated in Europe’s great effort to purchase the vaccine. It was Europe’s success that we all bought the vaccines together.”

The Greek premier asserted that by the end of March nearly 2 million Greeks will have been inoculated, as four large vaccination centers will have begun operation in Athens and Thessaloniki in February. “It will be possible to be able to welcome safely millions of visitors this summer,” he said, expressing optimism that the 2021 summer season will turn out much better for tourism that that of 2020.

Managing the inoculations, and the planning for them was “the most complex exercise the Greek public administration carried out for a long time,” but he also noted the need to convince a major part of the population to be vaccinated. “Millions of vaccinations have already taken place, and if there were serious side effects, we would know about them,” he said.

In terms of the repercussions of the pandemic, he said the government moved fast “with a strategy and a plan, instead of spending all its money from the start.” He also revealed that the two-week shut down early in January was his decision, not the experts’ committee, to prevent more infections after the holiday season.

Noting that stores cannot remain shut indefinitely, he said, “Our basic concern is to help commerce get rid of stock.”

In terms of the Greek-Turkish exploratory talks that are set to restart at the end of the month in Istanbul, the prime minister said the only topic is delimiting the maritime zones, and cited the success of agreements with Italy and Egypt. He expressed optimism “that we will find a framework for long-term agreement and resolving of the only difference we can talk about with Turkey.”

Commenting on media reports he is thinking of calling snap elections this year, Mitsotakis said “my intention is to exhaust the four-year term of this government. The year 2021 will not be an election year.” In addition, he asserted, “We have a solid and effective parliamentary group, a reserve of trust, and our goal is to return the country to a development path.”