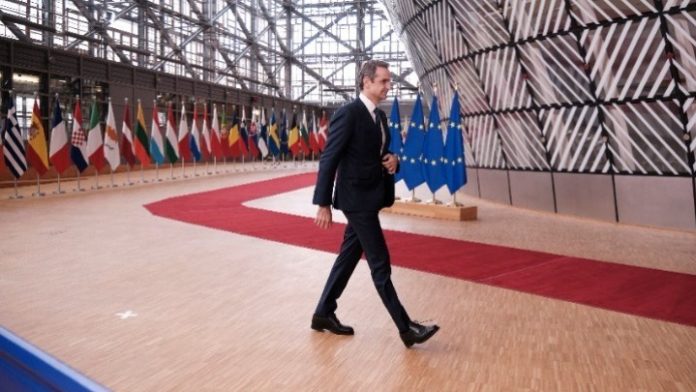 In line with conclusions reached at October’s European Council meeting concerning Turkey, EU leaders will come back to the situation in the Eastern Mediterranean and relations with Turkey and should reach certain decision on the issue, said Prime Minister Kyriakos Mitsotakis upon arriving at the two-day summit of EU leaders in Brussels on Thursday.

To reporters, he said that “it now remains to be seen, if we, as Europe, are actually credible in what we have agreed upon, as agreements must be kept.”

“On the issue of the Eastern Mediterranean what is at stake is very simple. It is the credibility of the European Union. We agreed in October that, should Turkey continue its provocative behavior, there will be consequences. Pacta sunt servanda (agreements must be kept).”, the Greek Premier wrote on Twitter, in English, a short while after his doorstep statement.

According to government sources, Greece’s target at this European Council meeting is the implementation of decisions reached at October’s E.C. conference, which was reaffirmed in November, they added. Concerning the draft text of these decisions, sources pointed out that “we are working on improvements, as there still are, unfortunately, some countries that do not want sanctions or measures against Turkey.”

The Prime Minister will also seek to raise the significance of specific issues pertaining to Turkey’s geopolitical attitude, one of them being “the instrumentalization of the migration and refugee crisis,” while he will also remind EU leaders of his earlier November proposal for an arms embargo against Turkey, they added.

They are, ultimately, directed against the entire EU bloc, and are incompatible with the Union’s values and principles, was stressed.