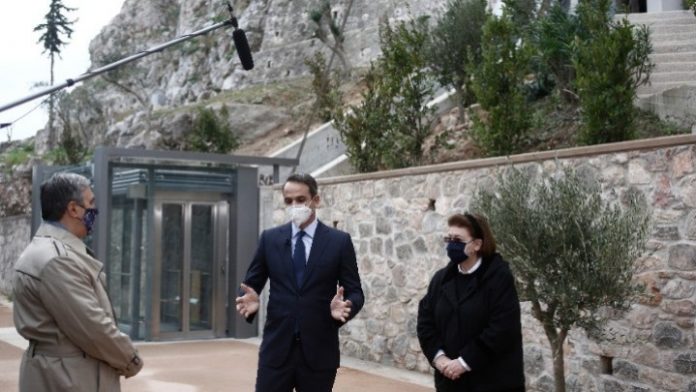 Prime Minister Kyriakos Mitsotakis on Thursday welcomed the inauguration of a new elevator for people with disabilities at the Athens Acropolis, noting that this was “a great and glorious day, which proves that the State can work with institutions that share the same goals, vision and philosophy, in order to deliver such an emblematic project to the global community, on the International Day of Persons with Disabilities.”

As Culture Minister Lina Mendoni stressed, the elevator was the result of the good cooperation between the Onassis Foundation and the culture ministry.

Mitsotakis pointed out that both the new elevator and the new paths make the Acropolis more accessible to those with mobility difficulties and the elderly. “This government does not like words, but actions,” Mitsotakis noted, stressing that the project would not have been possible without the help of the Onassis Foundation. He also referred to the government’s National Plan for the Rights of People with Disabilities, which foresees universal accessibility for all people everywhere, and has been unveiled for public consultation.

The prime minister stressed that the new paths on the Acropolis have been constructed with full respect for the law, under the supervision of the chairman of the Acropolis Monuments Preservation Committee Manolis Korres and expressed his regret at the opposition’s criticism for what he described as a “global” project, which ought to unite everyone.

“The National Plan for the Rights of Persons with Disabilities is my personal commitment, you know all the reasons why I have a personal sensitivity,” said Mitsotakis, who again thanked all those involved, because – as he said – they delivered such a difficult project on time.

Afterwards, Mitsotakis, Mendoni and Prof. Korres inaugurated the elevator and walked around the new Acropolis pathways.