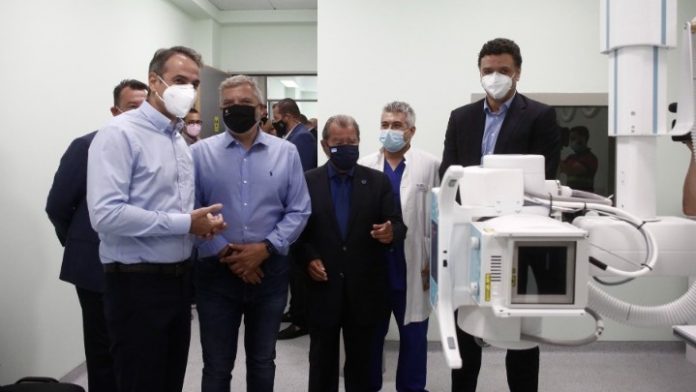 Attending the official opening of the Keratsini Health Centre on Wednesday, the second anniversary of the elections that brought the current New Democracy government to power, Prime Minister Kyriakos Mitsotakis said the centre was “the best proof that the government, in spite of the great crises that it had to manage in the last 18 months, at no time backed down from its pledge to be at the side of the citizens, especially our weakest fellow citizens, with works of substance, not communication.”

Starting on Thursday, the Keratsini Health Centre will open to serve more than 90,000 people in Keratsini, Drapetsona and Perama, as well as the broader Piraeus area.

“Today, it is two years since the day that the Greek people entrusted the governance of the country to our government…I could not imagine a more symbolic visit that that of today,” the prime minister added.

He noted that the new centre was not only fully equipped with the latest in medical technology but also fully staffed, offering services ranging from prevention and diagnosis to treatment and rehabilitation.

Mitsotakis expressed satisfaction with a recently observed increase in appointments for vaccination, expressing hope that this trend will continue. He again appealed to the people that have not already done so to go and get vaccinated: “The vaccines work, they are effective, they protect you, they protect us all.”

He also stressed that faster vaccination was essential to tackle mutations of the virus:

“The only way that we can face these, especially the aggressive Delta variant that has already appeared in our country, as is happening everywhere in Europe, is to speed up vaccinations,” he said. The prime minister pointed out that 99 pct of those that became seriously ill or lost their lives to the virus had not been vaccinated.

He concluded by expressing his conviction that “we will emerge as winners from this ordeal, so that we can deal with the long-term problems of the national health system in a more systematic way.”

Mitsotakis was then given a tour of the facility by the head nurse and spoke with the doctors and nurses at the centre.
Health Minister Vassilis Kikilias emphasised the fact that the centre was fully ready to start operating, having all the necessary infrastructure and personnel.

“As Kyriakos Mitsotakis has ordered, any project that is inaugurated in the health sector from now on will have the infrastructure, personnel, equipment, catering and security and will be delivered to the public with all services that benefit them,” he said.

Also present at the inauguration of the centre, which will be able to provide 24-hour hospital care, were representatives of regional and local government. The centre is fully equipped with state of the art equipment and offers general medicine, pathology, gynaecology, paediatric and dentistry services, as well as an operating theatre for minor surgeries and a recovery room, ultrasound, X-rays and microbiology lab.