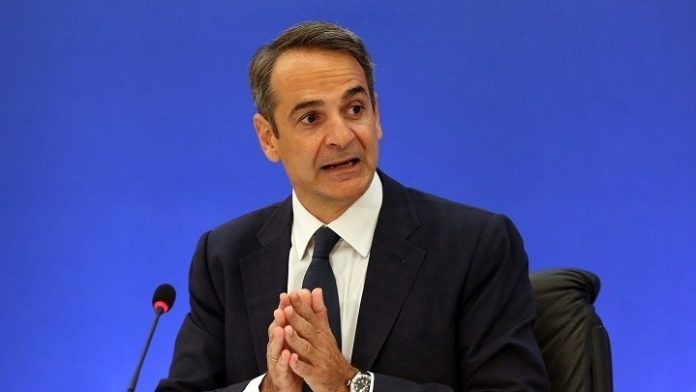 The climate crisis is here and is showing us that everything must change. The facts demand bold solutions for which I am ready, Prime Minister Kyriakos Mitsotakis stated on Thursday at a press conference on the wildfires that hit the country in the last days.

Our top priority during natural disasters is and will be the protection of the life, both of human and of animal, said Mitsotakis adding that “we achieved to protect thousands of people but we lost forests and properties. It is important that we did not have casualties in the largest wildfires we have encountered in the last years” and explained that the organised evacuation practice bore fruit.

Mitsotakis thanked all those that participated in the firefighting battle adding that “this government wants and knows and will build again next to citizens all those that have been destroyed. My personal engagement is to rebuild what has been destroyed. The compensations will start being disbursed in the next days. The negative experience of the disaster to become a positive power for change” he said.

“I apologised to the citizens and I did it because I felt it as a personal need” Mitsotakis said “when you see all these around you, they shock you and you react. It was a spontaneous reaction but also a political action that marks the decision for action. We have taken already some lessons and the responsibilities that can be personalised will be attributed at the right time and surely not at the time of the battle. The responsibilities do not concern only persons and should not be attributed in the heat of the moment. The government has proved that it does not hesitate to recognise its mistakes” the premier underlined.

At a press question if there was a delay in the request for support from other countries, Mitsotakis said that the request was submitted immediately when the reality showed that the condition was beyond our powers. It was moving that 24 countries contributed with aircraft and firefighters and fire engines, he said.

Asked on the effectiveness of the fire prevention plan announced before the recent wildfires, Mitsotakis said that “we are judged from the result. Last year we had only a few fire but this year we experienced what we experienced” he underlined adding that the heatwave the prevailed in the country was unprecedented and turned Greece into a powder keg with result all the wildfires that broke out, maybe not all by accident, 600 wildfires broke out in a period of 7 days. Next year we will be better. Ι can’t cancel the preparation that has been made but the phenomenon was beyond our powers and the level of our preparation.

Asked if there was an arson plan, the premier said that this is something that the justice will investigate. “It is certain that all the fires did not broke out by accident but I do not have the evidence to say if it was an organised plan”.

On speculations claiming that the burnt areas will favour the change of use of land and the real estate investments in Tatoi and that the wildfire on Evia are linked with wind turbines, Mitsotakis explained that this discussion is totally groundless because the Constitution provides the immediate reforestation of the burnt areas.

He also clarified that the government will complete its four-year term ruling out the possibility of early elections.
“The indications show that the economy will recover soon, the figures from tourism are encouraging and if we continue on that way we will exceed the targets set.

At a press question on the developments with the novel coronavirus, Mitsotakis said that the vaccination rates have significantly dropped in August and unfortunately, even if it was expected, it has repercussions.
He said that a new effort to support the vaccinations should be launched in September adding that “the variant Delta is not playing games” and explained that they will take advantage of all the available means to encourage our compatriots to get vaccinated and “we will be ready before the end of August to announce our policy for the indoor places for the autumn and the winter adding that there will be no substantial changes it terms of the approach on who will be able to access indoor entertainment venues.