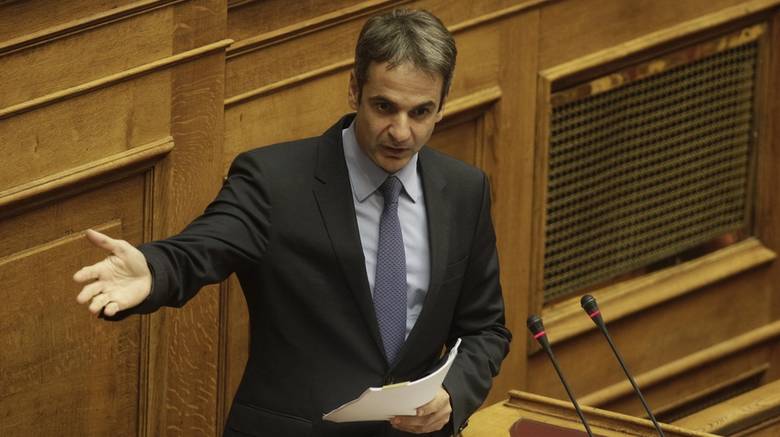 “This is the last act of a political farce”, main opposition leader Kyriakos Mitsotakis said, addressing the parliament during a plenary session on the vote of confidence.

Mitsotakis referred to the government’s decision to ask for a vote of confidence as a parliamentary maneuver with three different objectives, namely: to keep SYRIZA in office for a few more months; to pave the way for the Prespes Agreement, which is damaging for Greece’s national interests; and to provide a lifeline to the Independent Greeks (ANEL).

He then warned the government not to attempt any fast-track voting procedure and stated that the Prespes Agreement should be discussed at length in parliament, with all members expressing their opinions and assuming their responsibilities.

Furthermore, the New Democracy leader said of the fast-track procedure that it is a disgrace for the parliamentary system, since the government is not seeking to secure the support of the Greek people, but is instead looking for 151 deputies willing to attach themselves to SYRIZA’s rule.

Mitsotakis then accused the government of turning foreign policy into a tool for undermining Greece’s national identity, and stated that SYRIZA is responsible for the toxic climate currently reigning over the country.

Concerning the appointment of Admiral Evangelos Apostolakis as Defence Minister, Mitsotakis said that even though he honours the latter’s service as admiral, the prime minister’s decision to appoint a high-ranking military officer as head of the Defence Ministry was a “grave mistake, as it does not respect the separation of powers.”

About the Prespes Agreement, Mitsotakis said that a “yes” vote opens the path for the recognition of a so-called “Macedonian” identity and language, as this is the content of the agreement.

“Greece needs political stability”, Mitsotakis added, and expressed the opinion that the only way to achieve this is by going to elections as soon as possible.