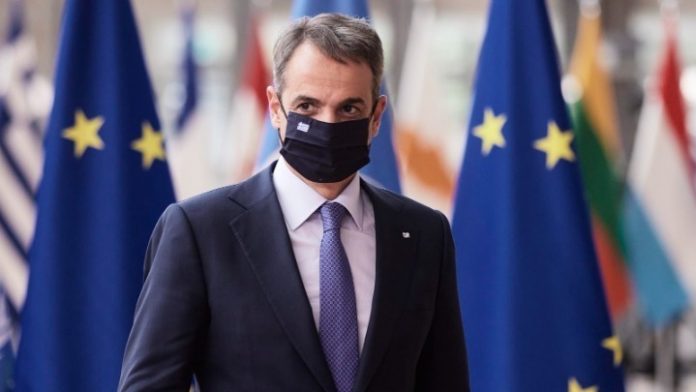 “I would like to single out three issues of special importance from the exceptionally rich agenda of June’s Summit,” Prime Minister Kyriakos Mitsotakis said upon arriving at the European Council meeting in Brussels on Thursday.

“First, it is very important to repeat, during the discussion we will have with the UN Secretary General, that the only solution that can be found for the Cyprus issue is within the framework of a bizonal, bicommunal federation with political equality. Any discussion of a solution that concerns the creation of two separate states is rejected as a matter of principle because it is contrary to all UN Security Council resolutions, as well as the European acquis,” Mitsotakis said.

Regarding Covid-19, the Greek prime minister said: “We expect the immediate activation of the European Certificate from July 1 by all the member-states in order for free movement of citizens within the EU to become easier. However, the huge challenge remains speeding up the vaccination rate as we now face the Delta variant, which has already appeared in many countries, including in Greece. I would like to repeat a very simple message that Mr. Fauci, the top American epidemiologist, sent yesterday. If you are vaccinated, you are safe. If you are not vaccinated, you are in danger. As simple and clear as that.”