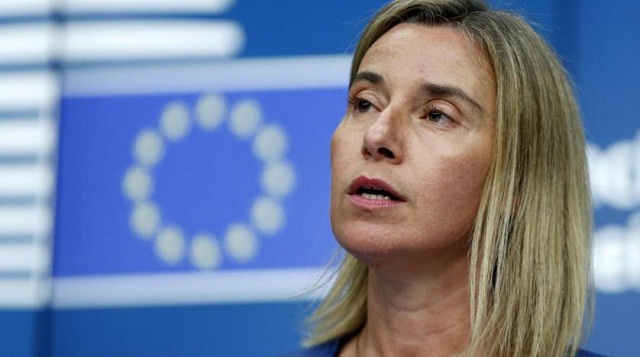 High Representative of the Union for Foreign Affairs and Security Policy, Federica Mogherini described the Prespes Agreement as a “ unique opportunity for reconciliation in South East Europe,” praising Tsipras and Zaev’s “political courage.”

In an exclusive interview with the Athens-Macedonian News Agency, ahead of the crucial vote in the FYROM Parliament next Tuesday, Mogherini stressed that this is an opportunity, in the interest of all, that “might not come again any time soon.”

1. Ahead of the vote this month on the name issue in the FYROM Parliament, what would you consider as a positive conclusion.

I had the privilege to attend the signing of the agreement by Prime Ministers Alexis Tsipras and Zoran Zaev in June at Lake Prespa. The two parties showed political courage, leadership, responsibility, working tirelessly to bridge gaps, to overcome old difficulties to reach this historical agreement that the whole Europe saluted. At the same time I understand the sensitivities and complex historical background of the issue. The negotiation process must have been painful and the result a compromise for both sides. There are now national procedures for the implementation of the agreement ongoing in both countries, and these must be protected and respected.

Our position is clear: the European Union fully supports the agreement reached. This is a unique opportunity for reconciliation in South East Europe, which is also in the interest of Greece, an opportunity that might not come again any time soon.

2. If the result is positive, would the procedures for the accession of the country in the EU be accelerated? What is the timeline?

Reconciliation, regional cooperation and good neighbourly relations play a crucial role in our engagement with the Western Balkans and are also key principles of the enlargement process. So resolving such a difficult issue has a major importance for the region, but it is also an opportunity for moving forward on the European Union path. If this momentum is used wisely to advance also the work on the reforms that are needed, we are looking at significant progress. The Member States have paved the way to the opening of accession talks in June of next year, based on the well-known conditions for the process. This is part of our reinforced engagement with the region, which is in the interest of all, our Member States and the Western Balkans.

3. A positive conclusion would also mean more stability in the Balkans?

The historic agreement reached can contribute to the transformation of the entire region of South-East Europe. Fostering good neighbourly relations helps us work together to address the many opportunities and challenges we share, including in fields such as security and migration. The refugee crisis showed us that wars starting far from Brussels or Athens have an impact, sooner rather than later, in Europe. The Western Balkans are at the heart of Europe, we are interdependent. I believe that together we can achieve a lot for the prosperity, security, stability of all our people.

4. Are you worried that the talks between Serbia and Kosovo for land swap could be a destabilising factor for FYROM?

To the contrary, I believe that the whole region will benefit from a comprehensive normalisation agreement between Serbia and Kosovo covering all outstanding issues. The normalisation of relations between Kosovo and Serbia will underpin the development of relations and cooperation between them and the European Union and this will have a positive impact on the entire region, as has had the Prespa agreement. And the Prespa agreement showed that with political courage and determination even the most difficult issues can be solved. This has already proven to be a source of inspiration for the Dialogue.

As you know, the dialogue between Belgrade and Pristina for the normalisation of relations aims to promote cooperation, bring normalcy to the relations between Serbia and Kosovo, achieve progress on their path to the European Union and effectively improve the lives of the people. I will continue to work intensely with both parties on a comprehensive and sustainable agreement, that will be supported by the international community and fully implemented by all parties. As I have stressed on a number of occasions, this agreement would be in accordance with international law and in line with the EU acquis and values.