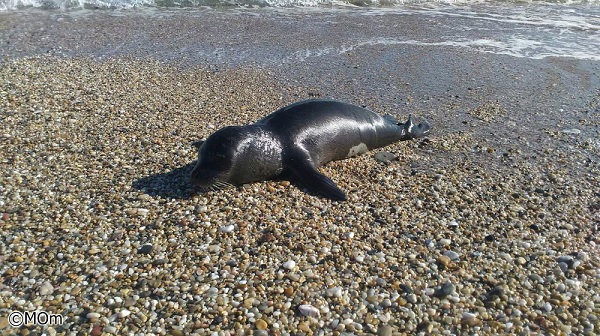 The Greek-Dutch biologist Dr. Alexandros Karamanlidis, a researcher working with the Hellenic Society for the Study and Protection of the Monk Seal (MOm), has been awarded the Society for Marine Mammalogy “Conservation Merit” prize for his work to protect the Mediterranean monk seal.

The award, which is awarded for an exceptional contribution toward solving a pressing conservation problem and is presented for only the second time, will be given to Dr. Karamanlidis on October 26 at the 22nd Biennial Conference on the Biology of Marine Mammals in Halifax, Canada.

Given for action to study and protect marine mammals, the award was given to Dr. Karamanlidis as the coordinator of the non-governmental MOm research team “which has, in recent years, been at the centre of international action for the protection of the Mediterranean monk seal that is threatened with extinction.” The conservation committee that selected Karamanlidis for the award also noted the large number of scientific papers published by MOm, saying that they act as a foundation for the scientific monitoring and management of the species’ recovery.

“It is an immense honour for me as a biologist and an important international distinction for Greece, since the award is handed out for the second time, but also recognition of MOm’s work for the protection of the endangered Mediterranean seal,” Karamanlidis said in statements to the Athens-Macedonian News Agency (ANA). He noted that, in the past 15 years, the foundations have been laid to scientifically monitor the rarest species of seal on the planet, with more than 30 papers published.

He also expressed hope that the award will lead to greater recognition of MOm’s work by the state, and to more state action to protect the seal that was a symbol of the Mediterranean and was threatened with extinction.

Karamanlidis pointed to encouraging signs of a recovery in monk seal populations based on a re-evaluation carried out in 2015, raising its status from “critically endangered” to “endangered”. He noted that there were fewer than 700 Mediterranean seals in the world, with the largest part of their population based in Greece.