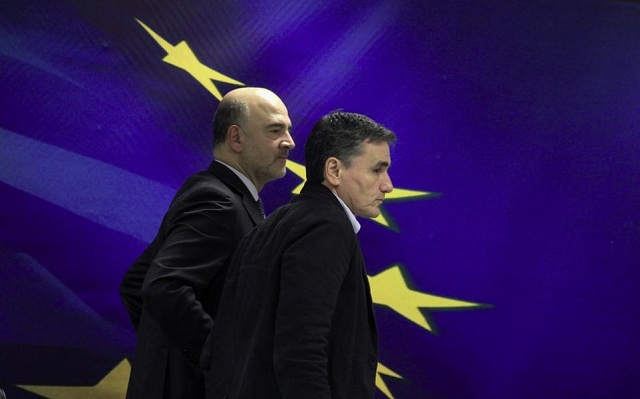 The site of the former Greek airport at Elliniko and the full implementation of e-auctions are the two prior actions that remain to be completed before the disbursement of 5.7 billion euros in loans to Greece, European Commissioner for Economic and Financial Affairs Pierre Moscovici said after the end of the Eurogroup in Brussels on Monday.

“Very significant progress made in Greece, 99 pct of prior actions done: 108/110. Confident remaining two will be done in time for next Eurogroup, allowing decision to be taken on disbursement, Moscovici said in a post on his Twitter account.

Taking part in a press conference with Eurogroup President Mario Centeno and the head of the European Stability Mechanism (ESM) Klaus Regling after the Eurogroup, Moscovici noted that the implementation of these two prior actions was largely technical in nature and not directly under the control of the Greek government.

Replying to questions, both Moscovici and Centeno noted that the e-auctions prior action will be reviewed in the coming weeks.

“We understand that the Greek governmentt took necessary [legislative] actions to make it work and now we have to evaluate how this thing is impelmented throughout Greece. We have been informed that there has been quite substantial progress in very important jurisdictions in Greece, that represent the vast majority of e-auctions to be implemented and we expect this to be concluded in the coming weeks,” Centeno said.

According to Regling, the 5.7 billion euros can be disbursed to Greece after mid-March while he pointed out that 3.3 billion euros of this sum is to be spent on covering the country’s borrowing needs, 1.9 billion euros on creating a cash buffer and 0.5 billion euros to pay off state arrears to the private sector.

Asked to comment on reports of a heated discussion between Greece’s Finance Minister Euclid Tsakalotos and European Central Bank (ECB) President Mario Draghi on the e-auctions issue, both Centeno and Moscovici played down the incident and suggested it had been exaggerated by reports.

“Nothing special happened during today’s Eurogroup,” Centeno said, while again expressing satisfaction with the “outstanding work” the Greek government was doing and its ownership of the programme. “We don’t expect much disagreement on an arrangement for surveillance after the programme,” he added.

According to Moscovici, work has already started in the Eurogroup Working Group (EWG) and the institutions on what will happen after the conclusion of the programme.

“We are working on three dimensions, which are key for a successful conclusion: The first is that there should be the design for a Greek-owned growth strategy, which should be presented to us by Greek Easter in order to help Greece to re-enter into the European semester as soon as possible; the second is that work has also started on a debt package which can alleviate the debt burden on Greece in the medium-term, especially with the idea of building a mechanism for linking growth performance to debt reduction; and thirdly, there is also a discussion on post-programme surveillance, with the idea that nothing should look like a forced programme, that the post-programme surveillance must adapted so that we can be alongside Greece but with Greece as a sovereign country.”

The purpose of all three dimensions, Moscovici added, was that Greece becomes a normal member of the Eurozone, with normal surveillance, normal performance, normal strategy and normal sovereignty, so that Greek peopel can finally see the fruits of the difficult efforts they have made in the last years.

Asked about the growth-linked mechanism, Centeno said the EWG has started work on a mechanism that aims to linke possible EFSF loan reprofiling to growth development in post-programme period, while noting that this was in a preliminary stage.

“We aim to have sufficient progress for a first discussion on this mechanism in March or April, he said.

Moscovici noted that the heads of the institutions are due in athens to begin talks on the fourth and last review next week, while noting that the aim is to have a plan ready by the Eurogroup in May so that a decision can be taken by Eurozone finance ministers in Luxembourg on June 21.