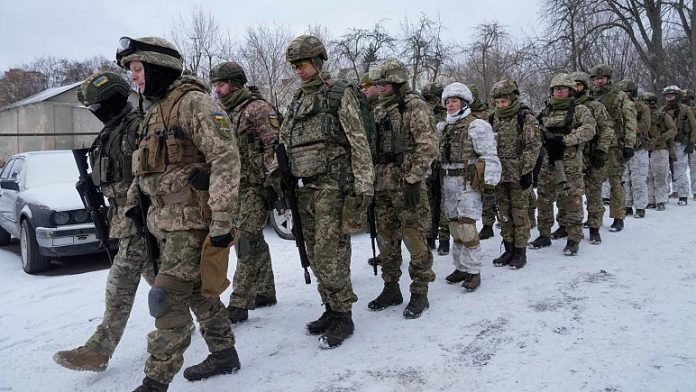 The United States ordered family members of government employees at the country’s embassy in Kyiv to leave amid increased fears that Russia could invade Ukraine.

The State Department also authorised the departure of some embassy employees who wish to leave Ukraine.

“We are continuing to pursue the path of diplomacy, but if Russia chooses further escalation, then the security conditions, particularly along Ukraine’s borders in Russia-occupied Crimea, in Russia-controlled eastern Ukraine…can deteriorate with little notice,” a senior State Department official told reporters, according to a transcript of the call.

“I just want to be clear that these are prudent precautions that in no way undermine our support for or commitment to Ukraine,” the official added later.

Ukraine’s foreign affairs ministry called the US decision “premature and a manifestation of excessive caution.”

“There have been no radical changes in the security situation recently: the threat of new waves of Russian aggression has remained constant since 2014, and the accumulation of Russian troops near the state border began in April last year,” spokesman Oleg Nikolenko said in a statement while urging people to remain calm.

The US and its allies have increasingly warned over the last few weeks that Russia could invade the neighbouring country after amassing 100,000 troops at Ukraine’s border.

The United Kingdom’s foreign office said in a statement on Saturday that they had information indicating Russia was “looking to install a pro-Russian leader in Kyiv as it considers whether to invade and occupy Ukraine”.

The foreign office said that Ukrainian MP Yevheniy Murayev was a possible candidate. The Russian foreign ministry dismissed the UK statement as “nonsense”.

The US and EU have called for Russia to de-escalate tensions by drawing down its troops on the Ukrainian border.

US Secretary of State Antony Blinken spoke with his Russian counterpart Sergey Lavrov in Geneva on Friday, a day after warning of “massive consequences” in the event of any Russian military incursion into Ukraine.

Russia began building up more troops at the Ukrainian border in November after a similar move in March 2021.

In December, Russia sent a list of demands to the US and its allies, including that the North Atlantic Treaty Alliance, NATO, not expand to Ukraine or any other former Soviet countries, something dismissed by the US as a nonstarter.

Lavrov said on Friday that the US would deliver a written response to the Kremlin’s demands this week. Blinken emphasised that the response would include the US government’s “many” concerns.

Blinken said he expects the two sides “to meet again after Russia has had an opportunity to look at this paper and then we’ll see where we go from there.”

Russia invaded Ukraine in early 2014 and annexed the Crimean Peninsula, in a move that’s been largely condemned as illegal by the international community.

Thousands have been killed in the fighting in eastern Ukraine between Russian-backed separatists and Ukrainian forces since the invasion.