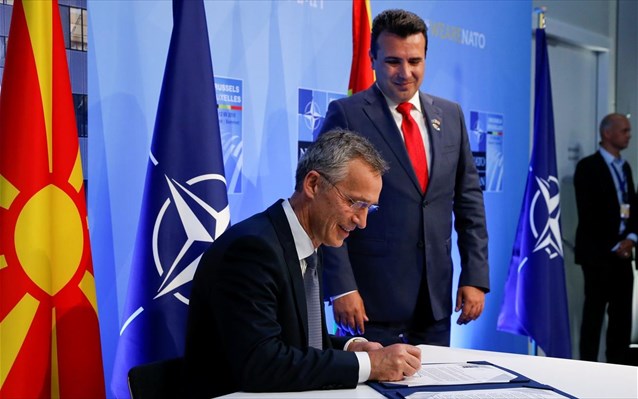 NATO Secretary General Jens Stoltenberg and FYROM Prime Minister Zoran Zaev signed an invitation to the Balkan country to join the alliance, at a special ceremony shortly after the conclusion of the NATO Summit meeting in Brussels on Thursday.

“I have just signed a letter informing Prime Minister Zaev of NATO’s decision to invite his government in Skopje to begin accession talks with the alliance”, Stoltenberg said. The ceremony followed the decision by NATO leaders at the Brussels Summit to invite the government in Skopje to begin accession talks once the terms of the name issue agreement between Athens and Skopje are met.

“Once all your national procedures are complete, and all NATO allies have ratified your accession, you will become the thirtieth member of this alliance,” Stoltenberg told Zaev, congratulating him for his political courage.

Zaev, on his part, thanked Greek and Bulgarian Prime Ministers Alexis Tsipras and Boiko Borisov for helping FYROM achieve its dream, and called on his country’s people to celebrate the historic NATO event on July 14.