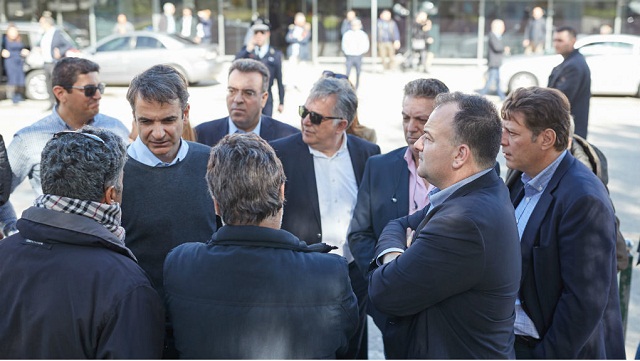 “The continued detainment of the two Greek servicemen by Turkish authorities is unacceptable and is poisoning Greek-Turkish relations,” main opposition New Democracy (ND) leader Kyriakos Mitsotakis said on Tuesday from the island of Symi, where he was paying a visit.

He explained that similar incidents have always occurred along the Greek-Turkish borders and had always been solved with good will from both sides.

Mitsotakis described all claims of espionage for the two soldiers on patrol as totally unfounded and asked for their immediate and safe return to Greece, urging the ministers responsible to do, even belatedly, whatever was necessary for their custody in Turkey to end.

The main opposition leader accused the government of understimating the incident “as it underestimated the continously escalating Turkish agressiveness not only in the Aegean but also in Cyprus,” and pointed out that Turkey, in yet another act of provocation, had issued a Navtex that surrounded the entire Greek island of Kastellorizo.

“Greece strives for good neighbourly relations with Turkey. Relations that are not only based on international law but also on the unwritten rules of mutual respect. Faced with similar provocations, Greeks have always been united, as we have proven in our long history. Nobody should have the slightest doubt that, if necessary, we have the determination, the international support and the strength to defend our national interests,” he said.