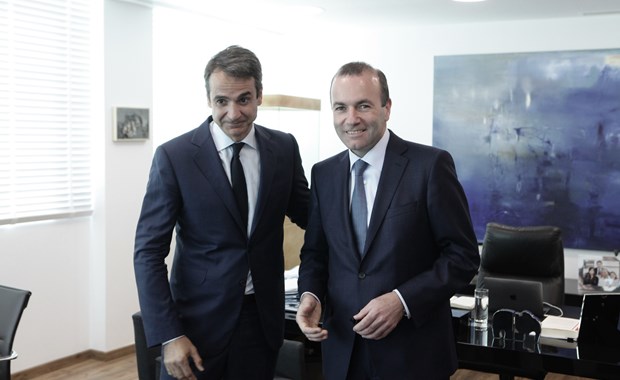 Mitsotakis said that Weber is well aware of Greece’s problems.

“Greece has gone through a very long and very painful test. The Greek people have been forced to suffer very important sacrifices. Sacrifices that, unfortunately, seem to have brought no results with the existing government,” Mitsotakis said adding that his party’s clear intention is to proceed with a bold reform agenda and step by step build on this reform agenda the lost credibility of our country.

He also added: “In the light of this bold reform agenda, we have to discuss honestly with our creditors issues that concern both primary surpluses and debt-related issues. I believe that both Europe and Greece will win by a new relationship of trust, which I have no doubt that the next ggovernment can build with the European institutions.”

On his part, Weber said: “My first message to New Democracy and its leader Mitsotakis is that they play an important role in the European People’s Party. They are doing a lot of work with us at a European level, under Jean-Claude Juncker. New Democracy, today, contributes in the political progress at European level.”

He also stressed that Jean-Claude Juncker is 100 pct convinced that Greece must keep its leading position in the Eurozone adding “we are ready to do what is necessary to keep this promise.”

Weber added that the third bailout program currently on the table is 100 pct a programme of Tsipras.

“The additional cutbacks in Greece became necessary because of mistakes made by the government in the first year in power. Tsipras’ government has caused lack of confidence in the eurozone and has created problems for Greece’s relations with its creditors,” he stated.

“For the future of the Eurozone, we need a government that has the other countries’ full confidence and that is something that New Democracy can guarantee,” he concluded.