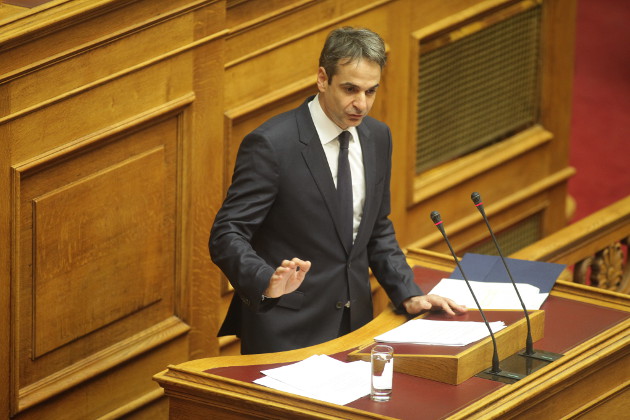 The present government cannot lead the country out of its economic crisis or handle large geopolitical challenges, main opposition New Democracy (ND) leader Kyriakos Mitsotakis said in Parliament on Monday, before the vote on the omnibus bill.

Charging Prime Minister Alexis Tsipras with “lying (by saying) that we will have a clean exit from the bailout program in August 2018,” Mitsotakis also said that the three “painful and lost years” that the coalition government of SYRIZA and ANEL (Independent Greeks) have been in power will have negative repercussions for the country’s future.

“In August 2018, we shall, at best, be at the same place we would have been in 2014, had the SYRIZA-ANEL government not intervened,” the ND leader claimed, adding that the completion of the loan program “will be followed by an informal memorandum, (in force) to 2022”. In order for markets to trust Greece and lend it cash with low interest rates after August 2018, it must have a reform program in place, Mitsotakis said, and this is something the present government cannot implement.

Speaking about Greek people’s debts, he said that one in two Greeks owes money to the state, while private debt overall has exceeded 100 billion euros. Of this debt, 25% was created during SYRIZA’s leadership, he charged, saying that nearly 1,000 confiscations are taking place every work day, and close to 700,000 Greeks are in a precarious economic position. “You reduce the taxes of casinos and raise those of all taxpayers. Only two categories are seeing a tax reduction: casinos and TV channels. Congratulations,” he said.