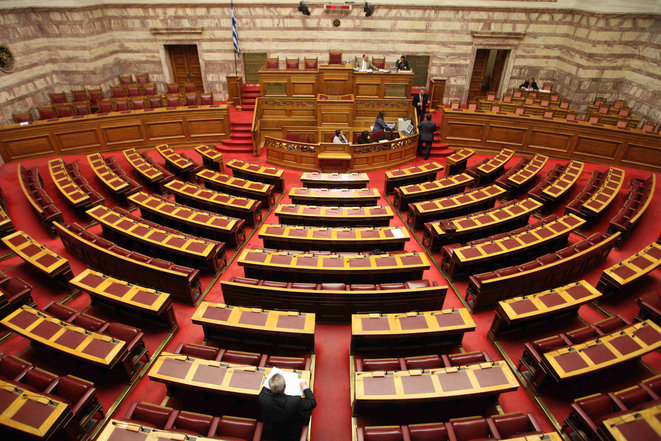 New Democracy tabled a request in Parliament on Wednesday for the creation of a House committee to examine the government’s handling of the economy last year, which led to the threat of a Grexit, the imposition of capital controls and the signing of a third bailout by the coalition.

The request came on the heels of the conservative opposition’s call for early elections during a parliamentary debate on Tuesday on corruption and judicial issues.

The government promptly dismissed the proposal on Wednesday as a tactical move to divert attention away from the allegations of rampant corruption during New Democracy’s term in office. It also derided calls for early elections, saying they were dictated by the vested interests that, it claimed, control the conservatives.

However, New Democracy spokesman Giorgos Koumoutsakos said on Wednesday that the call for early elections was “an act of duty” and accused the government of “clinging to power.” The country, he said, is “heading for collapse,” adding that it is incumbent on New Democracy to show people that country is at a dead end.

The move by the conservatives followed Prime Minister Alexis Tsipras’s call for a committee to be set up to investigate the granting of significant bank loans to heavily indebted political parties and media groups – in a move implying the corruption of parties of the opposition while they were in power.

The government has defended its record on the economy, saying that capital controls and financial asphyxiation were imposed on Greece as a form of blackmail by its creditors for deciding to call a referendum last summer over the terms of a Greek bailout.

However, sources admitted on Wednesday that going after the alleged corruption of the opposition “will not go far enough” in deflecting the public’s attention away from the ongoing tough negotiations with the country’s creditors and the refugee crisis. They added that the government is now banking on the completion of the bailout review and the start of discussions on debt relief as the only way forward.