The first round of the elections for a new president in New Democracy is likely to take place on the 20th of December, following marathon discussions between the four candidates and party officials. As such, the earlier plan for elections on the 13th of December has been abandoned.

With the main opposition party’s political credibility at stake, To Vima has been told that Vodafone has agreed to undertake the election process on the 20th of December. The second round of elections will take place on the 10th of January.

The delays and prolongation of campaign period is causing frustration and raising tension within the conservative party, with many fearing that the delays bring the prospects of a schism even closer. Although the postponement of the election process is attributed to technical faults, the development has turned into a political blame game amongst the four candidates and their supporters.

Furthermore, with Yannis Plakiotakis acting as provisional party leader, New Democracy is unable to effectively exercise its role in Parliament as the main opposition party.

Meanwhile, Christos Lazaridis, the close associate of former PM and party leader Antonis Samaras, has made a “prophecy” that the SYRIZA-led government will collapse, only for Mr. Samaras and Evangelos Venizelos to return to power. This comes a week after Makis Voridis urged the PM to step down and support a government under Mr. Samaras.

Not everyone within the main opposition party is pleased with such a prospect, with some arguing that “ISIS must leave from New Democracy” at the party’s recent parliamentary group meeting. Although it is not clear who made the statement regarding the so-called Islamic State, it is believed that it was targeted to Mr. Lazaridis and Mr. Samaras, who represent the more conservative and far-right elements within New Democracy. 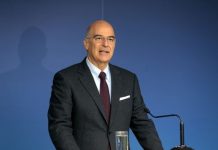