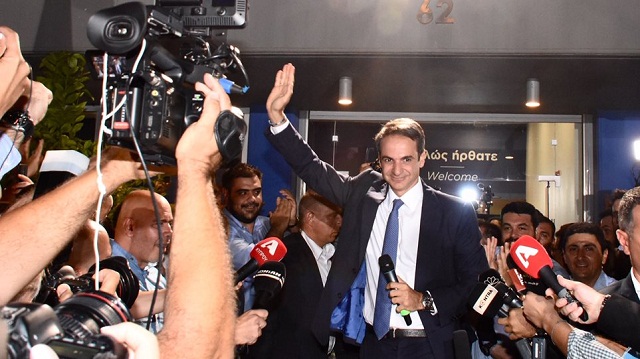 New Democracy won by large margin and forms a majority government, based on the results of the general elections in Greece on Sunday, July 7, with 90.85 pct of votes counted. A total of six parties will enter parliament based on this result and without the presence of far-right Golden Dawn. A breakdown of each party’s percentage of the vote and seats in parliament is as follows:

The handover ceremony for the premiership will take place on Monday, at the Maximos Mansion, after Mitsotakis’ swearing-in ceremony.

Mitsotakis: ‘ND’s victory is a victory for Greece and every Greek’

“The sovereign Greek people spoken,” New Democracy leader Kyriakos Mitsotakis said on Sunday, in his first statements after the elections.

He thanked the voters for their generosity in giving him a strong mandate with a majority government, noting that “ND’s victory is a victory for Greece and every Greek.”

“I will be the prime minister of all Greeks. I will work to convince our fellow citizens who did not support us. We are too few to be divided and we have a lot to do together. I am taking over the governance with awareness of the difficulties ahead. I have faith in my abilities and I will complete my mission,” he said.

“I am aware of the difficulties. I draw strength from the people, from this great stream. [The result] was not an expression of their will to end a painful cycle. It was the desire to take our fortunes into our own hands. I feel the need to address the Greeks abroad. I will not ask you to return. I am asking you to turn your eyes toward Greece. From now on we are working to change the country you had to abandon. The Greeks deserve better,” he underlined.

“I asked for a strong mandate to change Greece. You gave it to me generously. I will not deny your hopes,” the ND leader said, adding:

“Today I draw strength from my family, my wife and my three children. I feel my parents’ wishes protect me.

“Starting today is a difficult but wonderful struggle. The country proudly raises its head and we are rolling up our sleeves. The new government will work hard. The prestige of democracy and the institutions will be restored.

“I have promised to reduce taxes, increase investment, boost development, and create an efficient state. Transparency, accountability and meritocracy are returning to the country. Our national voice is becoming stronger in Europe. We are starting now. The parliament will work all summer.

“I am not asking for a grace period. We do not have time to lose. We are building a broad front of consensus.”

“As of tomorrow, the sky will be bluer, the sun will be brighter. A new day will dawn for our country,” he stated.