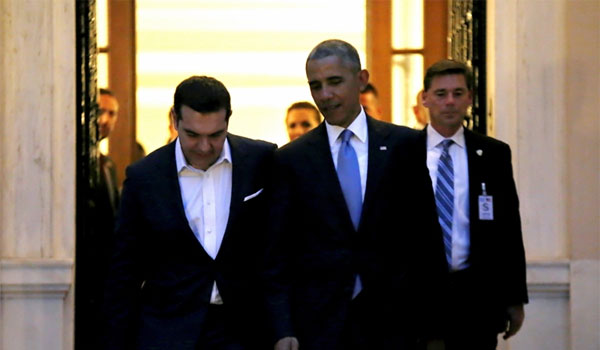 Obama told a crowed room at the Greek Prime Minister’s Maximos Mansion on November 15 that he discussed with the Greek premier Cyprus where the prospects for a just, comprehensive and lasting settlement are the best that they have been for some time.

“It doesn’t mean that success is guaranteed, but the possibility of resolving a decades-long conflict is there and we urge the parties to continue their work, the interests of all Cypriots would be advanced by a bi-zonal, bi-communal federation, we’re hopeful that a solution that’s durable, which would create new economic opportunities for all people across Cypriot is within reach. And it would be a powerful example to the world what’s possible with diplomacy and compromise,” Obama said in his opening statement.

Asked by reporters about Turkey’s role, Obama said, “This is ultimately a negotiation between Cypriots – Turkish Cypriots and Greek Cypriots. And the good news is that you have two leaders who seem genuinely committed to finding compromises and an approach that would serve both their people as one. If in fact you can see a meeting of the minds between them, then the issue will be can we make sure that all of us, the international community — Turkey, Greece, the United States — support that agreement in a way that can be ratified by both sides”.

Obama reminded that US Vice President Joe Biden has been actively involved in resolving the Cyprus issue. “We are encouraged by the progress that’s been made. I think there’s a window in the next few weeks, months, where this issue was actually resolved. And I think if we can find an equitable solution, it won’t provide 100 percent of what either side wants, there may be some mechanisms for a transition from the status quo to the future that both sides envision, but I think it’s achievable. And we’re going to do everything we can to support the process,” the US President said.

Tsipras said they discussed the need to find a fair and viable solution to the Cyprus issue on the basis of UN resolutions and compatible by the fact that Cyprus is an UN member state. “We have therefore we expressed our support to the very important critical bicommunal talks which are under way. Tomorrow I will be meeting President (Nicos) Anastasiades, who will be in Athens… Our aim is to find a solution that will benefit all of the Cypriots,” Tsipras said.

The Greek premier said they “discussed the possibility of opening new natural gas corridors in the Eastern Mediterranean, which will play an important role to peace, and stability in our region”.

Tsipras said important projects underway will upgrade Greece’s in the energy map”, such as the Trans Adriatic Pipeline (TAP), the Interconnector Greece Bulgaria (IGB), the upgrading of the LNG (liquefied natural gas) terminal and the Floating Storage Regasification Unit (FSRU) plant in Alexandroupolis which is now being designed.

“We also discussed the future where Greece, with its important shipping power, can become an important transit center for trade, transport and energy, linking Europe to Asia and to North Africa,” Tsipras said.

Obama said in his opening statement that he discussed with the Greek premier, who he called by his first name several times, the joint security challenges that we face as NATO allies. “We also discussed the need to continue sharing intelligence to help prevent terrorist attacks; the importance of keeping sanctions, including EU sanctions, in place until Russia is fully implemented the Minsk agreement, along with Ukraine,” Obama said.