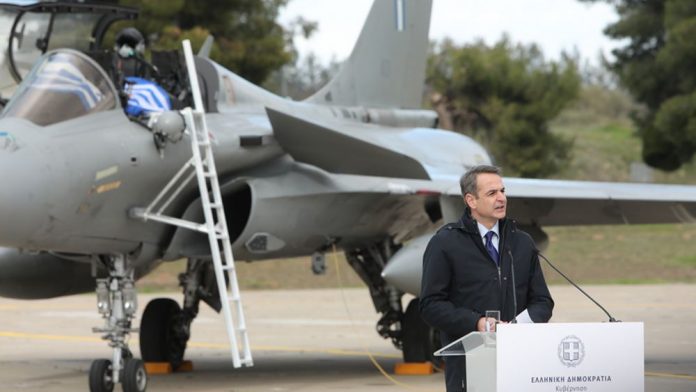 The arrival of the first six of 24 advanced fighter jets Greece is acquiring from France will increase the country’s deterrent power and are a clear sign that Greece is “changing and flourishing,” Prime Minister Kyriakos Mitsotakis said on Wednesday.

“The new fighters make our air force one of the strongest in Europe and the Mediterranean, and seal the Greek-French defense agreement,” he added in a speech at a ceremony for the arrival of the new aircraft at the Tanagra Hellenic Air Force base, north of the capital, after the jets flew briefly over the Acropolis on their journey from southern France.

“We do not need anyone’s permission to acquire these Rafales,” Mitsotakis said, adding that “while Greece closes the door on any threat, it keeps the windows of dialogue open.”

The prime minister, meanwhile, used the occasion to announce tax breaks for military personnel, saying that flight and diving bonuses will no longer be calculated as income and will therefore be exempt from tax. It is the least the government can do to reward the men and women on the front line, he said.

The French-built jets were also welcomed by Foreign Minister Nikos Dendias, who posted a photograph on Twitter of their flight over downtown Athens from his office balcony, where he was joined by his new Cypriot counterpart, Ioannis Kasoulides, who returned to the helm of the country’s diplomacy after the resignation of his predecessor, Nikos Christodoulides.