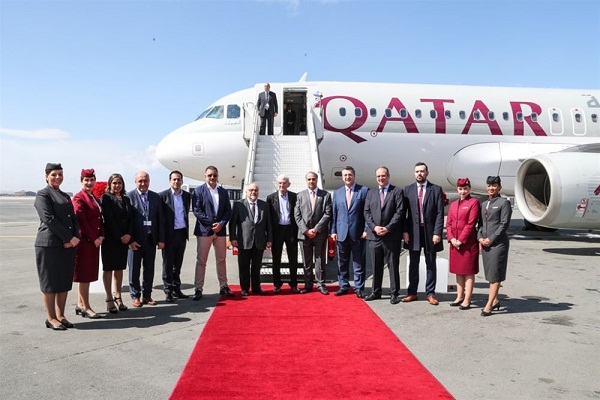 The first Qatar Airways flight from Doha was welcomed at Thessaloniki International Airport on Tuesday by Fraport Greece, the Qatari ambassador and regional and local government representatives.

“Qatar (Airways) will connect us to regions of Asia and Australia, and we have already seen our first groups of Japanese, Malaysian and Chinese tourists,” Spyros Pegas, deputy mayor of Thessaloniki for tourism and international relations told the Athens-Macedonian News Agency (ANA).

Qatar Airways will also inaugurate flights to a third Greek destination, the island of Mykonos, next month.

Arriving on the inaugural flight of the Airbus A320 were captain Jassim Al-Haroon, representing Qatar Airways Group, and Constantinos Orfanidis, Greek ambassador to Qatar. Besides Vilos, they were welcomed at the airport by Abdulaziz Ali Al-Naama, ambassador of Qatar in Greece, Regional Governor of Central Macedonia Apostolos Tzitzikostas, and Thesssloniki Mayor Yiannis Boutaris.

The first flight included passengers of several nationalities and was 90% full.