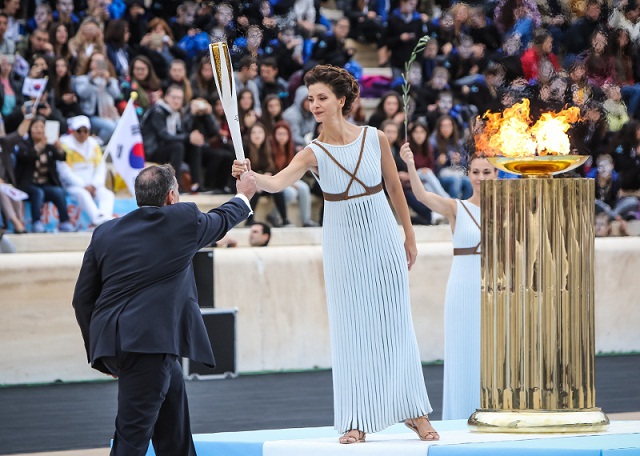 The Hellenic Olympic Committee (HOC) handed the Olympic flame to the organizers of the 2018 Winter Games in Pyeongchang, South Korea, at a formal ceremony in the Panathenaic Stadium in Athens on Tuesday.

HOC president Spyros Kapralos handed the flame to Lee Hee-beom, president of Peyongchang’s organising committee, in an event that included a ceremony with actress Katerina Lechou as high priestess that was choreographed by Artemis Ignatiou.

The event at the stadium was held in the presence of Greek President Prokopios Pavlopoulos, Deputy Minister for Sports Giorgos Vasiliadis, European Commissioner for Migration and Home Affairs Dimitris Avramopoulos, and US Ambassador to Greece Geoffrey Pyatt, among others. An audience of over 15,000 people attended the event.

The Olympic flame is on its way to South Korea, where the Olympic torch relay will continue until the opening of the Games on February 9.