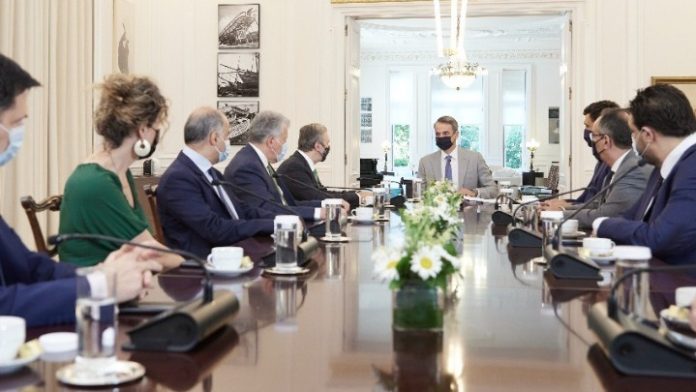 The chairman of the board of the Onassis Foundation, Anthony S. Papadimitriou, on Tuesday presented to Prime Minister Kyriakos Mitsotakis a study on a proposed national plan for organ donations and transplantation.

The prime minister praised the Onassis Foundation initiative, underlining that “the proposals you introduce will give hope to thousands of our compatriots who are in the final stages of heart, lung and liver disease and who live every day in anxious anticipation of a life-saving transplant”.

He thanked the Onassis Foundation and professors Elias Mossialos and Vassilis Papalois, who headed the group conducting the study, adding that this suggests a series of important interventions, such as a restructuring of the National Transplant Organisation. “This study provides answers to a series of extremely complex bioethical issues, including the ways we can encourage organ donation after a loss,” he added.

Mitsotakis said that the government will analyse the study and soon table a National Transplantation and Organ Donation Plan to the Greek parliament for ratification, so it can start to be implemented.

“The Onassis National Transplant Centre, which we hope will open its doors in 2024, will in any case be at the core of this huge effort,” he added.

On his part, Papadimitriou said the study was comprehensive and conducted by an acclaimed group of Greek and foreign scientists, headed by professors Elias Mossialos and Vassilis Papalois. He said it will serve as a road map for transplantation in Greece over the years to come.

“The aim is none other than to provide doctors and nursing staff with the necessary tools and means that will enable them to save as many of the patients who currently need a transplant as possible. For this reason we have undertaken this National Initiative that centres on the Onassis National Transplantation Centre, which we hope to deliver to the Greek State in 2024,” he said.