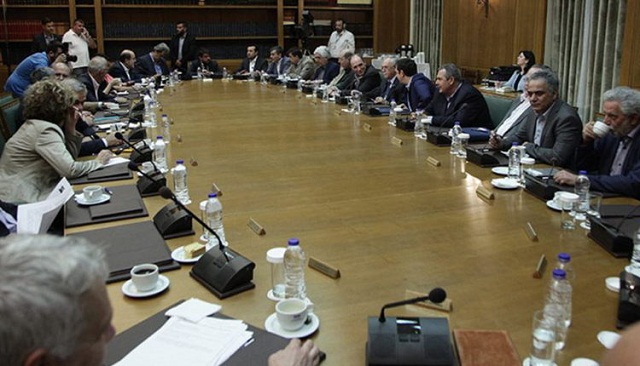 The parties of the opposition slammed the mini cabinet reshuffle announced by the government on Wednesday evening, focusing mainly on the appointment of former Democratic Left leader Forit Kouvelis in the position of alternate defence minister.

New Democracy spokesperson Maria Spyraki said the government is selecting “yesterday’s people” for the future. “If nothing else, Mr. [PM Alexis] Tsipras entertains people with his choices so they can briefly forget his disastrous policy. We thank him.”

Commenting on the same issue, the Communist Party said the morality of a government is not solely judged by whether some of its ministers enjoy “provocative privileges”, but mainly from the policy it is implementing now and serves the social class of the privileged. “This is what the SYRIZA-ANEL government is doing and will continue to do more intensely after the reshuffle,” it added.

On its side, PASOK criticized the cabinet reshuffle and the appointment of Kouvelis, saying: “The reshuffle of the rent allowance leads to a retreat of the SYRIZA/ANEL government. Congratulations to Mr. [Defence Minister Panos] Kammenos’ new junior minister, Fotis Kouvelis.”

In the same tone, Potami said: “With Mr. Kouvelis as alternate minister to Mr. Kammenos, the government of the ideologue Left and the conspiracy theory-prone Right gains new momentum.”