A 30-year-old Pakistani man was arrested in Corfu on Monday over charges that he knifed a 50-year-old British man and raped his girlfriend, 29, also British, on Sunday.

According to information by the Athens-Macedonian News Agency (ANA), the Pakistani was arrested at the parking of the General Hospital of Corfu. He had disappeared on Sunday morning, after he argued with the British man in the latter’s home at Ano Korakiana, injured him seriously by knifing him three times, and then raping the British woman who was living with him. The coroner’s office confirmed the rape.

According to details so far, it appears the Pakistani man was jealous because he used to have a relationship with the woman.

He was arrested on charges of attempted murder and rape, and is detained at the Corfu police department. The man, who has been arrested in the past over drugs, will be led before the prosecutor on Tuesday. 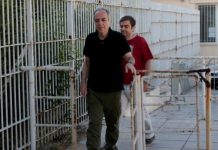