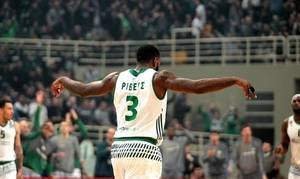 Panathinaikos ended the unbeaten record of Olympiakos in the Basket League defeating the Reds 72-59 at home on Monday to go level on points with its rival, but remained second on an inferior head-to-head record for the time being.

The Reds played without Patric Young and Matt Lojeski, while captain Vassilis Spanoulis limped off during the first half, leaving the Piraeus team seriously depleted. Even so it led 20-12 after the first quarter, before the Greens reigned supreme stretching their lead up to 16 points (63-47) in the last quarter, led by an inspirational KC Rivers with 26.