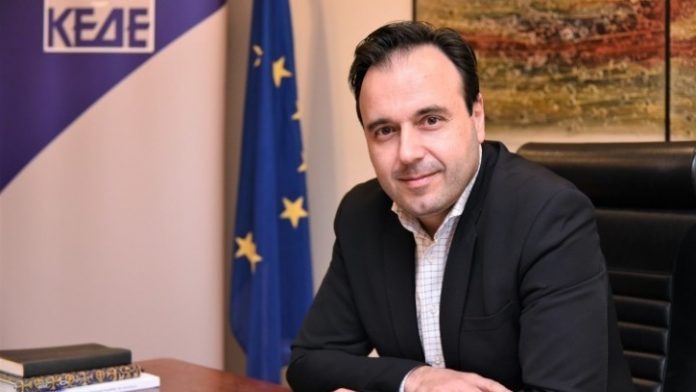 In an interview highlighting the key role of new technologies and the environment for the future of local communities, the president of the Central Union of Municipalities of Greece (KEDE) Dimitris Papastergiou, who is also the mayor of Trikala, emphasised that there was nothing “quaint” or “utopic” about a shift to green policies.
Talking to the Athens-Macedonian News Agency, Papastergiou said that new technologies and innovation will “usher in a new era for Greece” and that local governments had an obligation to adopt environmental policies that deliver a livable, human urban environment.
“KEDE is preparing a tool so that every municipality can set up a creative dialogue with its citizens and then proceed to lay down at least one cycling route,” he said, describing an initiative for planning cycle paths and pedestrianised roads.
Papastergiou also spoke about the role of local government in the response to the pandemic and in helping support local communities, as well as take the measures needed to contain the virus where clusters of infection arose.
He also noted the need to support the financing of municipalities, which had seen their budgets severely dented as a result of the measures in response to the pandemic, while he said that KEDE was striving for the inclusion of municipal-level local government in the management of European Union funds to be distributed in response to the pandemic.
Asked about his goals as head of KEDE, Papastergiou said he wanted the union to be a catalyst for “creating new, modern and strong municipalities…to help them access new financing instruments, understand the new technologies that are available to structures like municipalities and together find a new model for modern, decentralised and effective administration.”