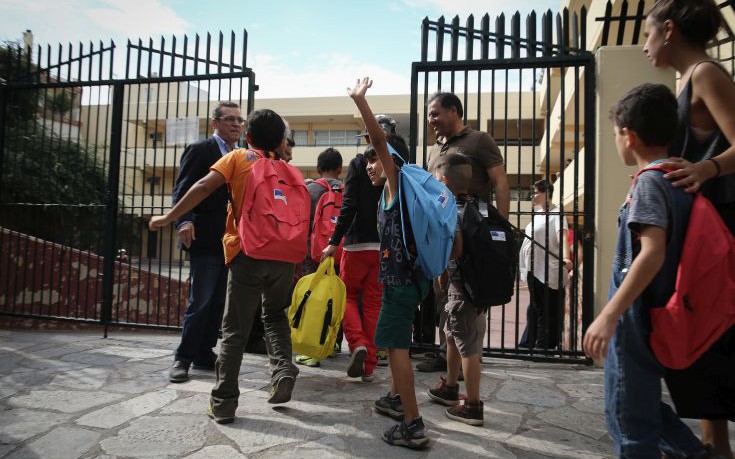 Around 100 police formed a corridor to enable some 40 puzzled-looking children from Syria and Afghanistan to enter the school at Profitis, a village a few kilometres north of Thessaloniki.

A similar number of parents – who had earlier padlocked the school gate – waved Greek flags and hurled insults at local education authorities.

“Our children will be raped and then, who will take responsibility?” one parent shouted.

“We are told these children have been vaccinated but we don’t believe them,” another said.

Some 1,500 refugee children attended classes in some 20 schools nationwide Monday, the first day of an education initiative set to include thousands of minors from war-torn regions.

Police said there were no incidents in the other schools where the plan was piloted.

The education ministry said refugee children received an “enthusiastic” welcome from parents and pupils at most other schools.

In one school in Thessaloniki visited by the local mayor, Yiannis Boutaris, Greek children welcomed the new arrivals with applause.

“Soon they will learn Greek, you will be able to play together,” he said.

Afternoon classes are being held for refugees in schools in greater Athens, the region in and around Thessaloniki, and other parts of the country.

But children in island camps, many of whose parents have applied for asylum and await relocation to the mainland, will not participate in the programme for the time being, a government source said.

“We need to finalise which of these children will be relocated to the mainland,” the source said.

No child will be allowed to join the programme without prior vaccination, officials have stressed.

Eventually over 10,000 children are to be part of the programme by the end of the month, according to the education ministry.

The Greek government had initially said it would enrol some 18,000 migrant children in schools from the end of September.

But last month parents in Oreokastro, a district near Thessaloniki, said they would not allow refugee children in their schools for health reasons, a stance condemned by the government.

Over 60,000 refugees and migrants are currently stuck in Greece after several European states further north shut their borders earlier this year.

They include thousands of Syrians fleeing civil war who are waiting for asylum approval or relocation elsewhere in the European Union.

But that procedure has been held up by the reluctance of many EU states to accept Muslim refugees after a spate of jihadist attacks in Belgium, France and Germany this year.