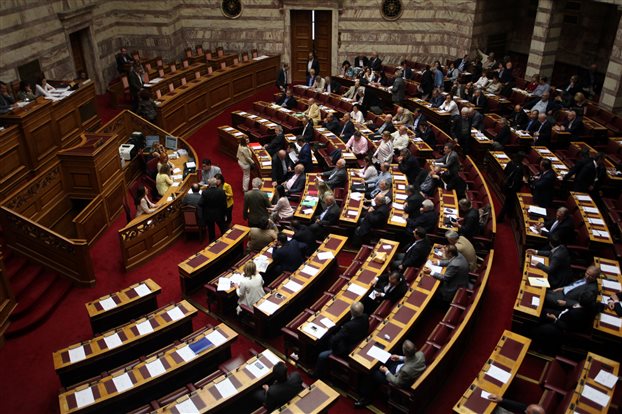 Greek parliament approved in principle and by majority on Sunday the omnibus bill on the prior actions demanded by Greece’s lenders to conclude the program review, with 153 votes in favour and 145 against. New Democracy MP Adonis Georgiadis and Potami MP Grigoris Psarianos were absent.

A surprise vote against two articles came by SYRIZA MP Vasiliki Katrivanou who voted against the new privatization fund and the contingency mechanism.

During a roll-call vote on the articles requested by Golden Dawn, opposition parties approved several of the articles: New Democracy voted “Yes” for articles 1-43 on the establishment of the Independent Public Revenues Authority, article 56 on amendments concerning gambling and articles 215-230 on the concession on regional airports and matters relating to contract implementation.

PASOK voted “Yes” on articles 215 and 216 on regional airports. The Communist Party voted “Present” on article 44 concerning issues of income taxation, article 48 on taxation of organizations for collective investments and article 56 on gambling. Golden Dawn voted against all the articles.

Potami voted “Yes” on articles 1, that concerns the establishment of the general secretariat for public revenues, article 56 on gambling, article 65 on the definition of a professional farmer, article 66 on changes to the taxation of alcoholic beverages, article 105 on the procedure to settle differences of the Competition Committee and articles 215-230 on regional airports. The party also voted “present” on article 153 on forest maps.
The Centrists Union voted “present” on article 66 on taxation of alcoholic beverages and articles 215-230 on regional airports. It voted “No” on all other article.

Independent MP Haris Theoharis voted articles 1, 5, 7 and 35 on the independent public revenues authority, “present” on article 66 on alcoholic beverages and 215-230 on regional airports.

The main opposition agrees with the harshest measures demanded by the institutions, Prime Minister Alexis Tsipras said in parliament on Sunday, adding that New Democracy leader Kyriakos Mitsotakis’ remark on Greece’s debt echoes that of Germany’s Finance Minister that the country’s problem is not its debt.

“Your problem is you identify with the worst positions of our creditors,” Tsipras told lawmakers during a debate on the prior actions bill demanded by Greece’s lenders to close the program review. “You want tough reforms but you don’t want a debt settlement. You are on the IMF’s side on reforms and on [Wolfgang] Schaeuble’s side on the debt issue.”

He went on to say that Greece’s problem is that it is negotiating with many parties, with the International Monetary Fund (IMF) demanding very tough reforms and additional measures, but also urging for debt cancellation. On the other side, he continued, Europeans say the measures demanded by the IMF are excessive and flexibility is needed, but at the same time cannot allow debt cancellation. “This is the problem of the negotiation,” he said.

Continuing on the debt issue, Tsipras said his government is fighting to achieve a “realistic solution … a significant debt reduction, so we can take the weight off citizens’ backs who will be burdened with the process of reconstruction in this country for the next years.”

He also cited a statement by European Commission President Jean-Claude Juncker who said “we’ve taken a lot from Greeks and given them little” and urged New Democracy to side with the national effort.

Tsipras also replied to ND’s request for elections: “You told us you will implement your great ideas from 2017 until 2021. What happened Mr. Mitsotakis? We should not leave yet? Shall we wait until 2017?” He went on to say that ND will remain in the opposition until September 2019 and then for at least one four-year term.

He then went on to announce the establishment of the Social Solidarity Fund, which he said will fund the minimum guaranteed income and tackle injustices. 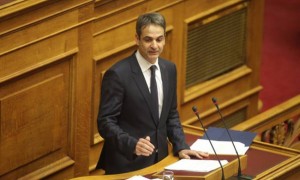 The demand for a contingency mechanism shows Greece’s creditors don’t trust Prime Minister Alexis Tsipras, New Democracy leader Kyriakos Mitsotakis said on Sunday, during a debate in parliament on the prior actions demanded by the country’s lenders.

“The mechanism measures your personal credibility Mr. Tsipras,” Mitsotakis said. “They are humiliating you with the mechanism and the superfund [privatization fund] and insulting the Greek people. Today is a day of shame for the Greek parliament. We’re paying the price of the government’s lies. Why does the Development of Public Property Fund have a 100-year life? Why wasn’t HRADF enough?” he asked. “Because they don’t trust you. The problem was never about the structure or operation of HRADF, but your inconsistencies.”

He went on to read out SYRIZA’s program which said it would cancel all privatisations and the “pillaging of public wealth” and asked: “Who are you kidding? You are binding the next generations. Shame on you Mr. Tsipras.”
The ND leader said the party will vote for the article on the creation of an independent public revenues authority and the privatisations included in this bill, referring to the concession for the operation of 14 regional airports.

Turning to Tsipras, Mitsotakis accused him of being “a populist, an opportunist and power hungry, who’s only interesting in remaining in power,” adding that ND’s request for general elections is more relevant than ever. “The sooner you leave the better for the country. We’ll build a political alliance, the wide reformist front the country needs,” he added.