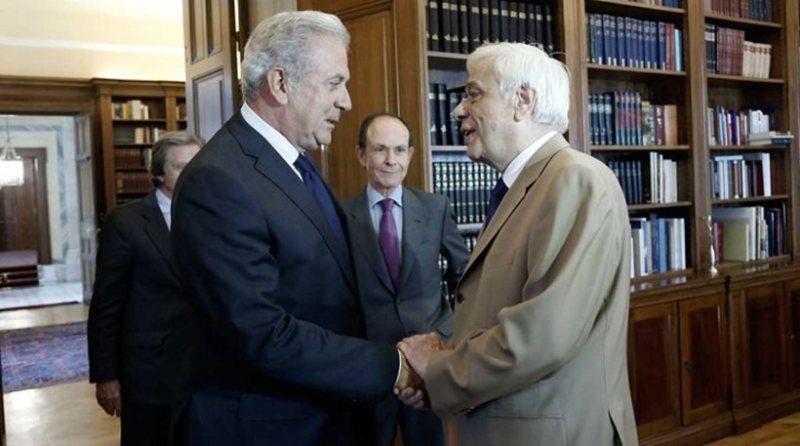 The collapse of the Schengen system in Europe would signal the collapse of Europe itself, Greek President Prokopios Pavlopoulos said during a meeting with European Commissioner for Migration, Home Affairs and Citizenship Dimitris Avramopoulos in Athens on Thursday.

Europe is experiencing a historic occasion in terms of its coherence and integration, he said, and challenges such as the so-called referendum on Catalonia’s independence in northeastern Spain should provide food for thought for all, especially for the European institutions that are responsible for the future of the European Union.

Expressing his strong commitment to the Schengen system, a cornerstone of EU policy that allows free movement of citizens across borders, Pavlopoulos said that Europe needs a brave and coherent foreign policy that will steer it through troubled times.Avramopoulos said that strengthening the role of Frontex to cover Europe’s sea borders was a major achievement and added that despite a recent tendency for the reintroduction of internal borders in Europe, Schengen was Europe’s greatest achievement in recent years and should be safeguarded.

“We offer (EU) member-states with such (a domestic) security issue the option of extending their internal border controls, but for a specific period of time. In other words, this should be a measure of the last resort, not permanent.”

Avramopoulos added that the EU is improving the movement of people at the borders at a fast pace, through “the introduction and operation of new technologies for better control of all who enter Europe – for security reasons as well – and for an improved management of our external borders.”