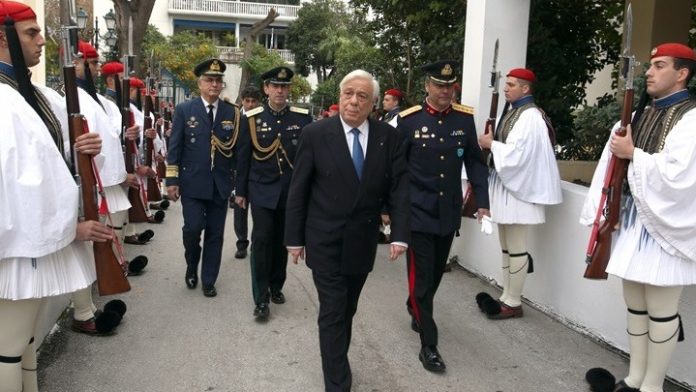 President of the Hellenic Republic Prokopios Pavlopoulos received political leaders, including Prime Minister Kyriakos Mitsotakis, at the Presidential Mansion on Wednesday in a New Year’s tradition.

The president, the prime minister, armed forces leaders and deputies of several parties had attended a Greek Orthodox liturgy for the New Year in the morning led by Archbishop Ieronymos II of Athens and All Greece, who wished everyone well for the new year.

President Pavlopoulos then received well-wishers, including government, military and religious officials at the mansion, before attending the cutting of the New Year cake (Vassilopita) at the facilities of the presidential guard.

At the presidential guard, Pavlopoulos addressed a strongly-worded message to Turkey that “no one should expect Greece to yield even an iota of the rights it has under international and European law.”
Pavlopoulos wished Happy New Year to Turkey and the Turkish people, calling them to live in peace with Greece. He warned however that “Greece is ready to face any threat against our homeland – Greece will face them prepared and united.”