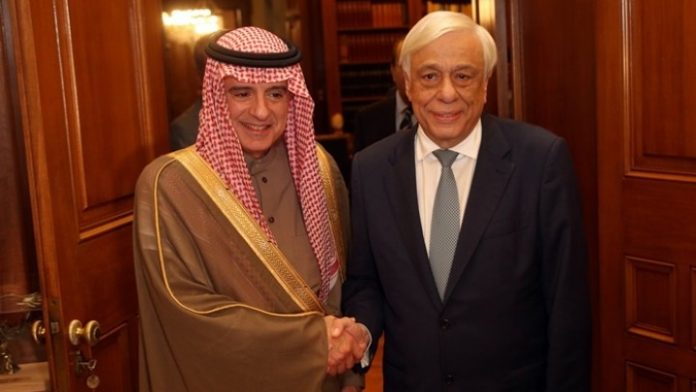 Pavlopoulos also reiterated his invitation to the Arab country to join the Dialogue of Cultures, describing it as a Greek initiative that “will bring East and West closer together” and foster peace in the region.

Adel al-Jubeir, who is on an official visit to Athens, said his country’s “vision is to collaborate in all sectors, (…) as we agree on several issues and in international organizations,” and emphasized the sectors of trade and economy as being of special interest.

He also expressed appreciation for Greece’s role in the region and the EU and said his country “tries to strengthen this partnership linking the two countries.”

Greece and Saudi Arabia can do better in trade and investments, visiting Saudi Minister of State for Foreign Affairs Adel al-Jubeir said in a press conference on Wednesday, as “the size of investment and trade relations does not correspond to the closeness of the two countries.”

The Saudi minister said that “Greek businesses are active in Saudi Arabia in several sectors, as, correspondingly, our businesses in Greece are, and we want to see how we can expand and enrich this relationship.” He particularly pointed out the sectors of tourism, culture, antiquities, defense industry, energy and shipping as providing “huge opportunities”.

Al-Jubeir also spoke of similar points of view shared between the two countries, and said “it’s time to activate this very friendly relationship.” Among the common stance held by both Greece and Saudi Arabia, he noted, were that “we both want a resolution to the Syria issue, the Israel-Palestine conflict, in Lebanon, we both want to restrict Hezbollah, radicalization, and ISIS, and we are both against Iran’s involvement in the affairs of other regional countries.”

Among other things, he said Saudi Arabia opposed Turkey’s invasion of Syria and considered Turkey responsible for negative repercussions of this, including a rise in terrorism.

He also referred to his country’s Vision 2030 plan to remain the main provider of energy in the world, but reduce its dependence on oil, by calling for investments in technology and renewable energy sources, he noted.

The visiting official met in Athens with the president, the prime minister, and the foreign affairs minister.