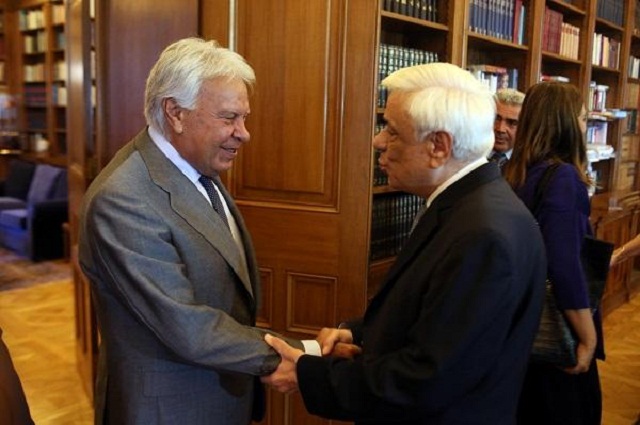 Our aim and vision, Pavlopoulos said, is European integration, in the form of a federal Europe, and he noted that the welfare state was the foundation of the EU.

On his part, Gonzalez said he felt honoured to be awarded by the Mayor of Athens, Giorgos Kaminis, who accompanied him to the presidential mansion.

“I am in the spiritual heart of democracy,” he said and stressed that democratic representation must become stronger within the EU. He also added that Europe’s political forces must once again become close to its citizens and underlined the structural problems that still exist today in the EU.

Gonzalez condemned the austerity imposed on the peoples of Europe during the economic crisis, including the Greek people, and referred to such policies as “suicidal”.

“We need governance that is democratic,” said Gonzalez, “not just bureaucratic.”

He noted that he is on Greece’s side in the refugee crisis, saying that it was crazy on the part of the EU to believe that Greece could face the refugee problem alone.