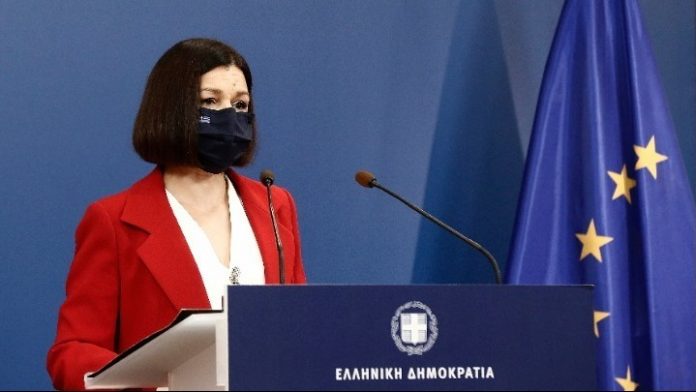 Alternate government spokesperson Aristotelia Pelonia began her press briefing on Thursday with a reference to the EU Summit starting later the same day. She said that Prime Minister Kyriakos Mitsotakis had arrived in Brussels and was meeting with European Council President Charles Michel, while a meeting with European Commission President Ursula von der Leyen was to follow. She also said that “the text of the Council conclusions concerning developments in the Eastern Mediterranean has not been published yet for reasons of confidentiality and will be discussed at the leaders’ dinner,” which is to be held on Thursday evening.

Peloni also announced that Prime Minister Kyriakos Mitsotakis has sent a letter to Cyprus President Nicos Anastasiades for the 60th anniversary since the Republic of Cyprus was founded, “in which he sent his wishes for progress and prosperity, underlining that the end of the Turkish occupation and the reaching of a sustainable and operational solution for the Cyprus issue, in accordance with the decisions of the UN Security Council and Cyprus’ capacity as EU member-state, remains Greek foreign policy’s top priority”.

Regarding the visit by US Secretary of State Mike Pompeo to Greece, Peloni underlined that “the government considers the results of his visit very positive. Even more so because it is the second in the last twelve months, it was preceded by his visit to Cyprus and was not combined with a visit to Turkey but also when it happens at this particular time.”

Referring to the developments concerning the pandemic, the government spokesperson admitted that there has been an increase in COVID-19 cases in Greece and particularly in Attica, “which are tending to stabilise, however,” Peloni said during Thursday press briefing.

Nevertheless, the overall picture in Greece was better than that in other EU countries with a similar population, she added, due to the measures taken and the citizens’ personal responsibility.

However, she said that the better epidemiological picture in Greece should not lead to laxity, as constant vigilance and increased awareness were essential.