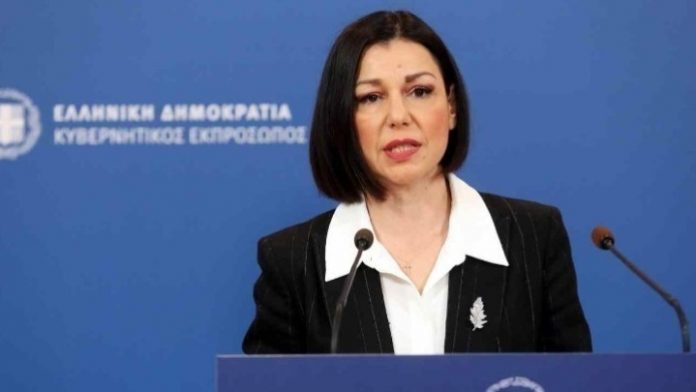 “It has been a year since the first case of coronavirus was diagnosed in our country. We suffered during this period like the whole world,” government spokesperson Aristotelia Peloni said on Monday during a press briefing.

“We restricted our economic and social activity. We adjusted our daily routine and many times we were forced to be away from our loved ones and our jobs. We mourned the loss of our fellow citizens. But we succeeded, as is recorded on European maps and recognized worldwide, and we did better than many other European countries,” she pointed out.

As Peloni added, “from the first moment we advocated the protection of public health because we care for the person next to us and because, without health, there is no production, consumption or services.”

Referring to the epidemiological situation and the vaccine roll out, Peloni said: “After a year, the virus remains among us and records a new outbreak due to the weather conditions and the mutations that have come to our country. Last week, its spread showed an upward trend in 56 of the country’s 76 regional units. The new cases are at an average of 1,500 per day and the health system is under strong pressure, especially in Attica, where new ICU beds are opening according to actual needs.”

“We all understand that the epidemiological situation today requires increased attention in order to travel the last mile of the marathon safely and end this ordeal sooner rather than later,” Peloni stressed.

“Therefore we are proceeding quickly – based on doses arriving in Greece – in carrying out vaccinations and we are optimistic that we will soon build the first wall of immunity, covering a large percentage of our elderly fellow citizens. A total of close to 890,000 vaccinations have been done since December 27.”

“Greece has so far lost only a 0.36 pct of doses, and is ranked among the top countries in the world. However, as vaccinations increase and the life of vaccines is limited, it is planned to expand the replacement mechanism with the inclusion of new groups of the population,” she noted.

Peloni made a special reference to the proposal of Prime Minister Kyriakos Mitsotakis for the introduction of a European vaccination certificate, which, as she said, “is already almost universally accepted within the European Council. The head of the European Commission, Ursula von der Leyen, said that the Commission was working to create a “gateway for interoperability between nations” and estimated that in three months the process would be completed.

She also referred to the hunger strike of Dimitris Koufodinas.

“It is obvious that Dimitris Koufodinas, who has been convicted of 11 murders, is seeking preferential treatment outside the framework of the law. He is blackmailing with a hunger strike. And although the law gives him an opportunity to make his request through justice, he has never done so. He chose to risk his life himself,” she said.

“Democracy is neither vindictive nor can it be blackmailed. The State is obliged to follow the law without discriminating. And that is what it will do,” Peloni added.