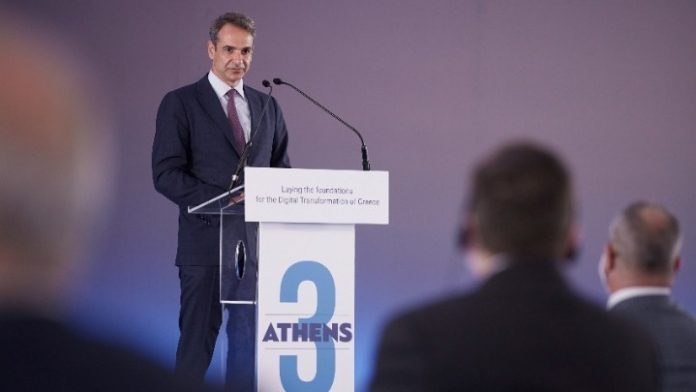 The new investment by Lamda Hellix in the Attica town of Koropi is a vote of confidence in the great effort that Greece is making to be at the forefront in the digital transformation of its economy, Prime Minister Kyriakos Mitsotakis said at the inauguration of a new Data Center.

“We are very happy when large foreign companies choose to invest in Greece. It is not only Digital Realty that has done so. However, this is also a vote of confidence in the overall momentum of the Greek economy,” the prime minister said and added:

“Indeed, in this area we have already achieved much in terms of providing services to citizens and businesses. I am especially happy every time a Greek citizen, a business person, recognises how many work-hours have been saved because they can now have access to key services from a computer or mobile phone, instead of going to a civil service department.”

Looking back at the recent past, the prime minister noted that Data Center Athens 2 actually started operating in mid-2015, a few days before capital controls were imposed. “And today, in 2021, we are here to establish a much larger Data Center, Athens 3. We hope that Athens 4 will follow very soon. I would like you to see how much Greece has changed in the six years since the operation of the second Data Center. We are here for this very important new investment of the company,” Mitsotakis underlined.

“A country that has launched, thanks to the initiatives of the Digital Governance Ministry, our great digital transformation so that we are now able to attract such investments and become a country that can accept infrastructure investments for the new digital economy,” he noted.

The prime minister described the digital transition as a fundamental pillar of his government’s policy and that is why, as he said, significant resources are being channeled from the Recovery Fund to many digital transition actions, many of which have to do with digital infrastructure.

He also stressed that new jobs will be created and noted: “We are talking about many well-paid jobs in the ecosystem of the digital economy. With more and more such investments, the employment prospects of young Greeks are improving, new return routes are being opened for young people who left Greece in the last 10 years, looking for a better future abroad, and I believe that in your own way you will [also make your contribution to this], so that the country can again attract human resources from abroad by offering many, well-paidjobs with good prospects.”

On his part, the President & CEO of Lamda Hellix, Apostolos Kakkos, said: “I am happy because Athens 3 will not just be a new data centre, it is the largest data centre in Greece, part of the largest hub in Southeast Europe and is the way with which we have a positive influence, accelerating the digital transformation of Greece.”