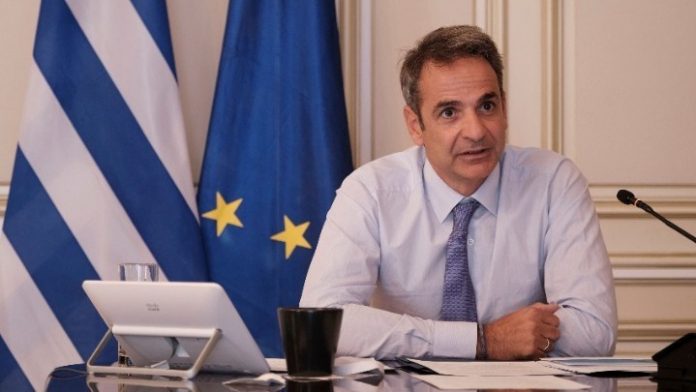 Greece would be interested in closer cooperation with the Organisation for Economic Co-operation and Development (OECD) particularly on linking education and skills with the labor market and on fighting inequality, Greek Prime Minister Kyriakos Mitsotakis said on Monday, during a videoconference of the organisation’s celebratory events for its 60th anniversary.

During the virtual event with heads of states and governments of member countries and the EU and Costa Rica, French President Emmanuel Macron, Spanish Prime Minister Pedro Sánchez, and OECD Secretary-General Angel Gurría led the events focusing on how the organization can shape “better policies for better lives,” as its anniversary motto declared.

Mitsotakis took part in a discussion with Gurria and with Icelandic Prime Minister Katrin Jakobsdottir, and outlined how the OECD had helped Greece introduce changes toward a new development model. He thanked Gurria “for his passion and his overall contribution to the OECD” and said he had worked closely with him both as prime minister and in an earlier government as minister of administrative reform. One of the projects with OECD involved “the systematic evaluation of administrative burdens we had to eliminate in order to turn the Greek economy into a more competitive one and to make public administration more effective,” he said.

In addition, the Greek government worked with the policymaking organization in the opening of product markets, and in the promotion of transparency and accountability of government.
Asked what suggestions he had for improving the OECD, Mitsotakis reiterated Jakobsdottir’s proposal, that following the pandemic and the changes it introduced, the organization should “build back better” – review its ways of operation and established viewpoints and adjust to the times.

Particularly, he said, two themes stood out where the organization could do more, especially relevant for Greece: “The linking of skills training with the digital economy, and how to reduce inequalities. Covid has taught us something about the dignity of work and that we need to guarantee fair and appropriate wages for low-paying professions.” During the coronavirus pandemic, he said, “we all understood [the] importance” of these factors.

In addition, the premier pointed out, “I agree entirely with what the secretary-general said, we can no longer rely to such a degree on consumption – the twin priorities of green and digital transformations naturally comprise an integral part of this government’s mandate.” The bolder the examples and best practices that OECD shares with Greece, the greater the country’s interest, he underlined.

Asked to comment on equality of the sexes, he said that his government “has not achieved as much as I wanted on this front,” with women’s participation rates in the labor market still low. “Things are changing, but at a slow pace,” Mitsotakis noted, adding that an example of a small change that could be introduced that would make a significant difference is to make it easier for women raising young children to go out to the labor market.