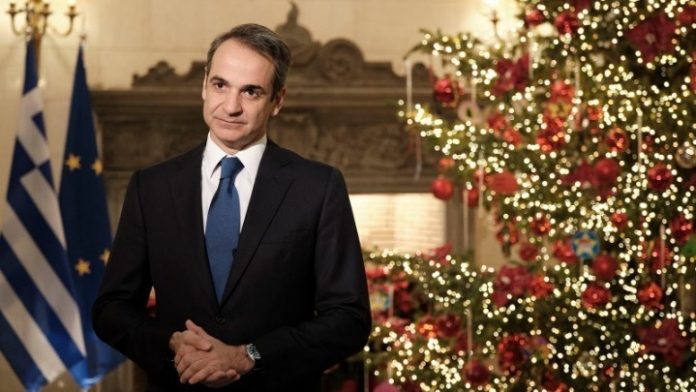 Prime Minister Kyriakos Mitsotakis expressed his confidence on a positive outlook for Greece in 2020 in his New Year message, which began with him observing what he called “optimism breezing around us and a new national confidence being established.” He also spoke of a newly established “belief that we deserve better and that, united, we can finally propel Greece forward.”

“Divisions, lies and incompetence – we shall leave all that behind us in 2020,” Premier Mitsotakis added, as “we are confidently moving ahead,” into a new year which he said will be characterized by “even more open-minded, bolder work.”

Outlining the government’s achievements in the six months since it came into power, Mitsotakis pointed out that the July 7 national elections “paved the way for fewer taxes, better jobs and more security,” but also “growth for all.”

“There are no capital controls in Greece anymore, and the country can borrow on the most favorable terms ever,” he said, while “new investments are creating more jobs and citizens pay lower property tax rates and social insurance contributions.”

On abolishing university asylum Mitsotakis said that “universities are gradually being returned to students and teaching staff,” and on the issue of public security he noted how, similarly, “neighborhoods are coming back to their inhabitants again.”

He stressed how some 32 laws have already been passed in 180 days, as the government has implemented no fewer than 60 of its sincere commitments, “thus honoring its pledge to hold true its agreement of truth reached with Greek citizens,” he added.

“We said we would do it, and we are doing it!” Mitsotakis exclaimed.

The prime minister also referred to recent developments in the eastern Mediterranean, and emphasized the significance of Greek people’s unity before the challenges. “Geopolitical challenges do not scare us. We stand on the side of the righteous, and we have strong allies. We have the ability to repel any challenge to our sovereign rights,” he noted and reiterated that “above all, Greek people are united and sensible.”

Finally, he pointed out what he called the “great danger” of quiescence, as “we are still at the beginning of a difficult road to regenerate our homeland.” He warned that “initial successes will lose their meaning if they are not continuous and lasting,” and that “a sense of normality can easily unravel unless it is characterized by speed and dynamism.”

Nevertheless, Kyriakos Mitsotakis expressed his optimism that although “we will face adversities in our journey through 2020, I am sure we will overcome these. Because we have read the map of the future correctly. We’re on the right track.”