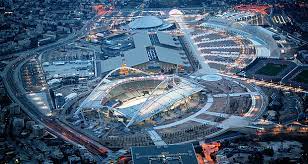 Greek visitors to the Olympic Sports Center of Athens ‘Spyros Louis’ (OAKA) must feel both pride and nostalgia remembering the Olympic Games of 2004, Prime Minister Kyriakos Mitsotakis said on Tuesday evening at the site, northeast of Athens.

At OAKA to present a master plan for the upgrade and development of the facilities, Mitsotakis said that “we all remember the peak moments of the Olympic Games of 2004”. But what followed, he said, was “disappointment that very important facilities were abandoned, pretty much what happened to all of the Olympic facilities.”

Mitsotakis said the master plan will overhaul the entire complex at a budget of 43 million euros provided by the Recovery Fund. “Our purpose is that its budget is balanced in three years and it starts bringing in revenues by the fifth year,” the premier noted.

Initially, the central stadium will be maintained and upgraded in terms of energy efficiency, and its central roof – which “has not been touched in the last 17 years,” he said – will be repaired. Also upgraded will be the indoor gym, the velodrome, the tennis courts and the landscape around.

The Olympic Center will turn into an Olympic Park of Athens, with separate ‘neighborhoods’ for athletes to practice in but also open to residents in the area. It is expected to attract a lot more of the nearly 20,000 people it attracts on weekends, Mitsotakis underlined, adding that the government believes that all large-scale projects of a country should contribute a lot to everyone.

The project, he said, is one of the 10 large-scale plans included in the government’s recovery plan, Plan Greece 2.0.