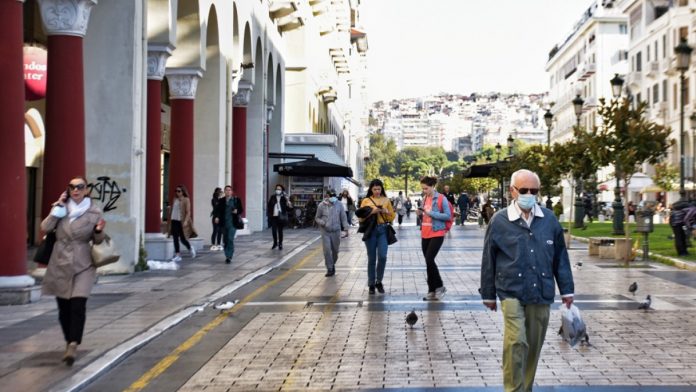 Prime Minister Kyriakos Mitsotakis spoke of a slight improvement of the situation in terms of the pandemic and indications that the pressure on the national health system in northern Greece is gradually subsiding, while addressing a virtual Cabinet meeting on Monday. He also pointed out the need to proceed without any backtracking in order to ensure that as many Greeks as possible remain healthy until there is a vaccine.

However, he added, “no one should doubt that some difficult days still lie ahead since the debate will now begin on how we will emerge from the strict measures,” adding that “we should not be speaking in terms of dates but in terms of data”.
Mitsotakis said that he expects the first vaccines to arrive in Greece before the end of the year if they are approved by the European agencies responsible.

He also said that the issues to be discussed at the Cabinet meeting reaffirm the intention of the government to “address the needs of today and launch the reforms of tomorrow.”

The prime minister characterised the development of a Greek rapid test for COVID-19 an “emblematic action”, noting that “it is a huge success, most of all for the Greek scientific community, which proves that Greece can, in issues of health also, produce knowhow and not depend on imports of products and services from abroad.”

“The results of the action, which was financed by the state via the General Secretariat of Research and Technology, are very encouraging. A rapid test of high accuracy, the rights to which belong to the Greek state and which we expect will begin to be produced soon and at very competitive prices…It is a very important success, first and foremost by Greek scientists under the guidance of the very capable and internationally acknowledged Professor Vassilis Gorgoulis,” the prime minister said.