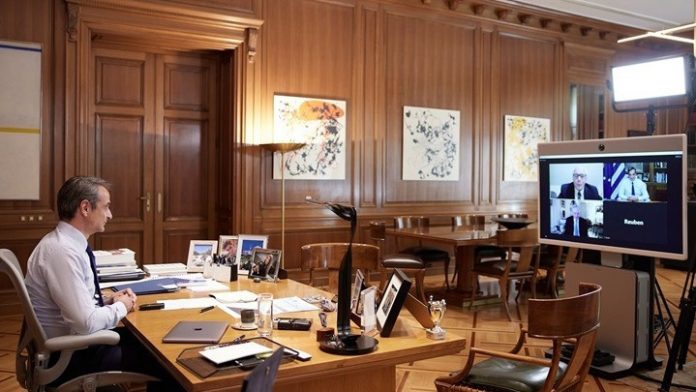 Asked about the measures he took for the recovery of his country’s economy, the Greek premier noted that the over-taxation of the middle class by the previous government led to very low growth rates and uncontrolled tax evasion. His government reduced corporate tax rate to below 28 pct, which will eventually stabilize at 22 pct, among other issues, and brought Greece’s cash reserve to 40 billion euros, he highlighted.

The Greek premier also reiterated that Greece is a country suitable for permanant relocation as much as it is a tourist destination. “Why shouldn’t someone who can work anywhere not choose to do it out of Greece?” he asked, and underlined that Greece is a safe, Eurozone-member country, and that the real estate market in Athens is currently booming.

Referring to the country’s digital transformation, he mentioned among other changes the gov.gr portal, which offers more than 1,000 services to citizens online.

Asked about the lessons learned by the decade-long financial crisis in Greece, Mitsotakis said that too much austerity kills off the economy.

“Never trust the populists when they present a manifesto which everyone knows is too good to be true,” he pointed out.

“What I would not like to see happening is a high-level of GDP but also rising income inequalities,” he stressed, adding that he wants “to ensure that everyone will benefit by an era of strong growth coming in the next few years. My top priority is the creation of more jobs.”

Commenting on Greece’s relationship with China, he said it “is complicated, as we are both partners and competitors.” China did make “a significant investment at the port of Piraeus, and they have upgraded the port quite substantially.”

On tourism, the Greek prime minister said it will recover fully in 2022: “I would rather welcome fewer tourists who spend more, than greater numbers of them who spend less.”