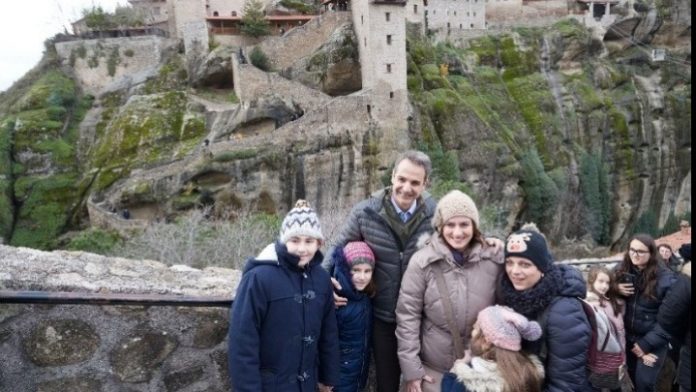 Prime Minister Kyriakos Mitsotakis visited on Saturday the monastic community of Meteora and particularly the monasteries Meghalo Meteoro and Aghios Stefanos and expressed his admiration over the first monks that established the monastic life on these rocks.

The premier underlined the need the weakest Greeks to be supported “especially in these holy days”.
Meteora which are included on the list of UNESCO’s World Heritage List is a rock formation in central Greece hosting one of the largest and most precipitously built complexes of Eastern Orthodox monasteries, second in importance only to Mount Athos.

In this context Mitsotakis noted the need for the promotion of this heritage. “Meteora is a beacon of Orthodoxy and in parallel an attraction for visitors from all over the world. As prime minister, I want to state that we will support this land and will further promote it and make it more accessible to the people without disturbing its unique, cultural and natural character”.