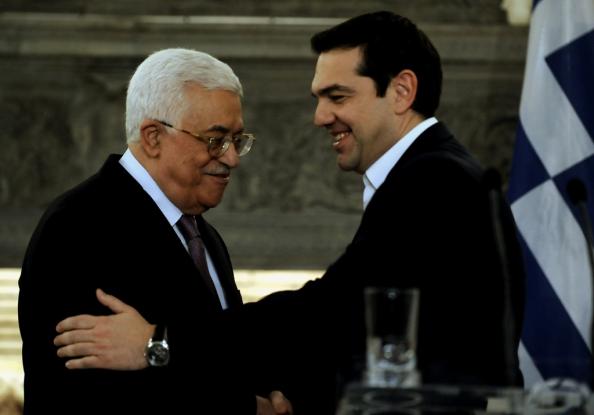 A resolution to the Palestinian issue is “key” for peaceful developments in the Middle East, Prime Minister Alexis

Tsipras said as he welcomed Palestinian President Mahmoud Abbas at Maximos Mansion on Monday, noting that Palestinians are a nation “that is fighting to find justice … and whose struggle has touched and motivated struggles worldwide.”

“Unfortunately, we live at a time when our region is surrounded by negative developments, great instability, wars, interventions, and growth of terrorist organizations and terrorist attacks,” Tsipras said. “This is why it is perhaps more crucial and more important than ever to highlight the need for cooperation, for finding peaceful solutions to the problems.”

He clarified that Greece commits to actively promote a two-state solution that “guarantees the establishment of a viable, territorially unified, independent and sovereign Palestinian state on the basis of the 1967 borders with east Jerusalem as its capital and which will coexist in peace and security with Israel.”

He also said that Greece wants to play a constructive role in this direction being a stable country in the wider region, but also as a traditional friend of Palestine and the Arab world and with its close relations and cooperation with Israel. “Therefore Greece can play this role of a bridge in the direction of a just and viable solution to the Palestine issue,” the premier said and added “we give new impetus to the resolution of the Palestinian issue”.

Completing his remarks, Tsipras noted the two sides jointly condemned terrorism and stressed the need to start a credible peace process with a clear political horizon.

On his side, Abbas expressed his belief that Greece can play a critical role in resolving the issue and thanked
Tsipras for meeting many times with him in the past months. “I consider myself most fortunate for meeting with you four times within this period. But this reflects the depth of our relationship and mutual trust between the two sides,” the Palestinian leader said.

“Our people and our land need to be defended by the international community in order to have peace and democracy, like other people do,” Abbas continued. “This is the last chance to have peace in the region and a resolution of the Palestinian issue,” he added.

The Palestinian leader also spoke of the historic ties between the two countries and the common elements that bind them together and noted that Tsipras has gone into the substance of the problem when he said that the Palestinian issue has to be resolved first in order to resolve other problems.

“So if the Palestinian issue is resolved, then the problem of terrorism that surrounds us all will also be resolved. We are in favor of combating terrorism; we are in favor of peaceful resolution and political settlement of all the problems we are seeing in Syria, Iraq and elsewhere,” Abbas told Tsipras.