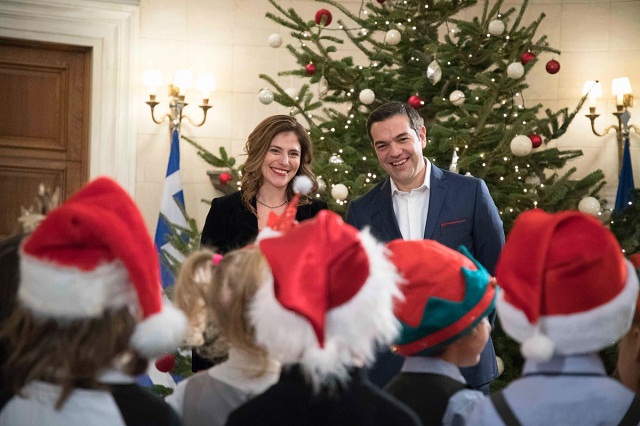 Prime Minister Alexis Tsipras and his spouse Betty Baziana welcomed children’s choirs at the Maximos Mansion government headquarters on Monday, in celebration of the Christmas holidays.

The first to perform was the Musical High School of Alimos, which opened the event shortly after 10:30 a.m. with a selection of holiday carols from several regions of Greece, and the prime minister offered each one a CD of Manos Hadjidakis’ “Gioconda’s Smile”, while Baziana handed out good luck charms.

Shortly after 11:00 a.m. students of the primary Intercultural Education School of Alsoupoli, most of whom are of African origin, sang Greek holiday carols and the Kenyan song “Kothbiro in both languages. The children presented Tsipras with a drawing with the motto “We are all different, we are all equal,” while the premier handed out individually copies of books by popular children’s author Alki Zei.

Following carols, the students moved to the conference room, where the prime minister asked them questions about what they want to be when they grow up.

Later, younger children from the 78th Kindergarten of Athens and the National Kindergarten arrived at the mansion, and were individually treated to sweets and good luck charms by Baziana.

Tsipras told the youngsters that sources had informed him Father Christmas would show up tonight, Monday. The children sat at tables with markers and paper and drew pictures for the prime minister and his spouse, and added their own hand-made decorations to the Christmas tree. Festivities ended with a magician’s performance.