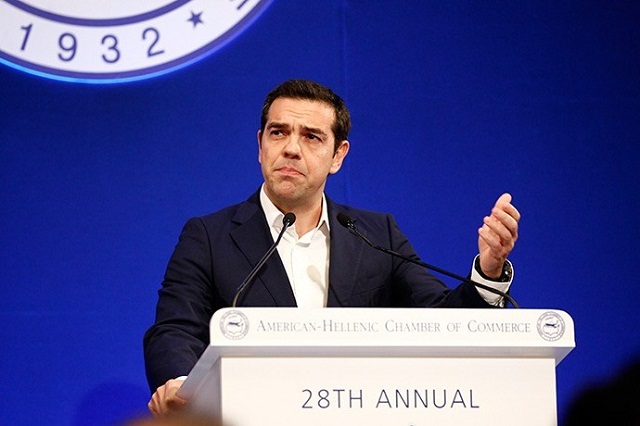 The hour of the Greek economy is here, Prime Minister Alexis Tsipras said in his keynote speech at the American-Hellenic Chamber of Commerce annual confence on the economy of Greece on Tuesday night.

Tsipras referred to the reform plan he had presented at the annual conference of 2015, where he had outlined his policy for a return to a healthy economy and a release from debt and supervision.

“I committed to this target and requested your confidence and collaboration in a joint effort to take the country out of the crisis and give it a new perspective,” he said.

“I am in the pleasant position of saying that the hour of the Greek economy has arrived,” he noted. “Our strategy was effective and the efforts of the Greek people have borne fruit. The country has turned the page,” Tsipras said.

Speaking of critics, the PM said implied that the main opposition undermined the country’s efforts and asserted that “the best response to all those as well as to certain technocrats who can’t stomach the fact Greece is turning the page is to look at the results, not our words.”

European Commissioner for Economic and Financial Affairs Pierre Moscovici has clearly pointed out that Greece will be a regular member of the Eurozone as of August 2018, Tsipras said, with supervision after the fiscal adjustment program – just as it happened with Portugal, Ireland and Cyprus – but without additional programs.

“The government’s basic goal is to make sure the positive results of growth pass on to society in the form of well-paid jobs and strong structures of social protection,” the premier stressed. This can only happened with a new and fair production model, leaving behind a state-fed business sector and the consumption of imports on credit. In the tourism sector, for example, Greece breaks a record every year in visitor numbers, but this is useless as long as imports for food send revenues abroad to third countries instead of producing locally and exporting.

Among the reforms that include a greater reliance on electronic transactions in public administration, the PM said that he personally created a task force to contact foreign investors personally and resolve issues that obstruct projects.

Referring to high taxation, which he said he knows is a problem he described it as a necessary step under the crisis the country faced and said this will be resolved when the country exits the fiscal program and tax rates can be reduced. “This will happen directly and is already foreseen in the medium-term program, in 2019,” he noted, adding that “the situation did not arise in a void, but has deep historical roots extending throughout the post-junta era,” he said.

Tsipras cited as some of those chronic issues “the loss of VAT revenues for decades, the destruction of the taxation mechanism, the smuggling of fuel and cigarettes, the bizarre tax protection and exemption of some favored parties, and the repercussion on society of losses by businesses with privileged access to liquidity.”

Tsipras called on his audience not to remain in the past but to see the larger picture. “The facts allow us to be optimistic but not to become less vigilant,” he said. “You know that today, three years later, we have honored your confidence. We initiated paths of communication at the highest possible level and we were always here to discuss proposals and exchange views in favor of growth, prosperity and the country’s future. We will continue to do this even now that the sacrifices have borne fruit, and it is time to claim the future we deserve together,” he concluded.