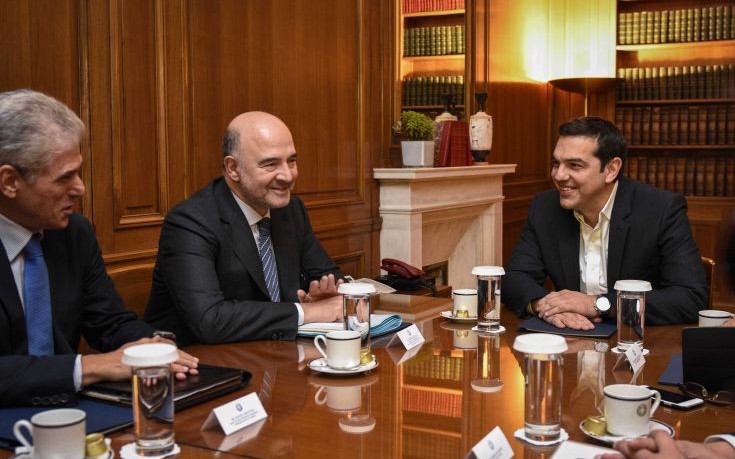 Meeting European Commissioner for Economic and Financial Affairs Pierre Moscovici in Athens on Monday, Prime Minister Alexis Tsipras called for a swift completion of processes for deciding specific measures to reduce Greece’s debt, according to an announcement issued by the prime minister’s press office.

During the meeting, they underlined the need to speed up processes for completing the second review of the Greek programme as agreed and without departures for the European social acquis, the announcement said.

Emerging from the meeting, Moscovici noted that Greece had come a long way in the last year since concluding a very important agreement with its EU partners and was well on its way toward exiting the crisis and regaining confidence. It was very important for him to visit Greece on the anniversary of this agreement “and show that the present and future of Greece is in the core of the Eurozone,” he added.

“We are no longer talking about Grexit; no one is talking of this. We are talking about success and I wanted to come here one month after the visit by [European Commission President Jean-Claude] Juncker to show that the Commission stands by the side of the Greek government and the Greek people, in order to continue the reforms that are already generating results in the real economy,” he said.

According to Moscovici, now was a time to leave the crisis and crisis management behind and enter a period of “normality, stability, implementation and investments.”

The figures appeared to indicate that the Greek economy was improving, that unemployment was falling and that a sense of confidence was returning, while the reforms already carried out or agreed were necessary to strengthen the structure of the economy and attract investments, the Commissioner said.

“We are moving in the right direction,” Moscovici added, noting that Tsipras’ recent trip to China was important in this regard. This did not mean that the reforms were finished, however, since a lot remained to be done and discussed in order to complete some of the prior actions of the first review and begin talking about the second review, he pointed out.

It was also important that all sides worked together cooperatively, so that the Greek side would take ownership of the reforms and “so we are in a good position to discuss measures to relieve the debt, especially with the International Monetary Fund (IMF),” the Commissioner noted.

“My message is one of trust and self-confidence and that now is the time for implementation and investments. We must have reforms that are good for the Greek people, which protect the economy and attract more investments,” he said.

Tsipras also referred to recent developments in neighbouring Turkey, noting that the last weekend had been “difficult” and that Greece was closely monitoring events in the neighbouring country.

Tsipras underlined that the Greek side supported democratic institutions and constitutional legality. “I hope that our neighbours will soon return to stability,” he said. Tsipras noted that July had been a difficult month for Europe, packing in Brexit, the lethal terrorist attack in Nice and the attempted coup in Turkey. “We are very sensitive on that issue because we had a coup in 1967 that lasted seven years,” he added.¨

On his part, Moscovici stressed that what is happening in Turkey is very important for Europe and that Europe cares a lot about democratic legality in Turkey.