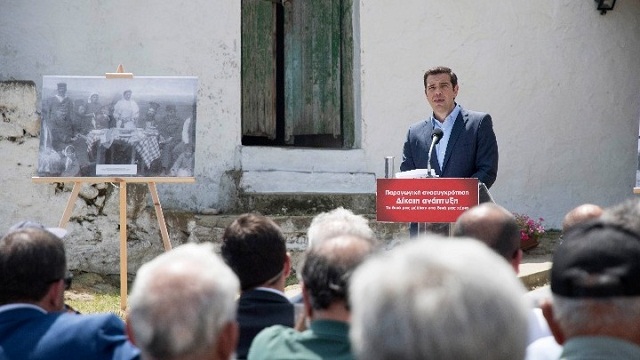 Greece is “reaching the end of a difficult path” after eight difficult years, and has stood on its own two feet, with an excellent fiscal balance, Prime Minister Alexis Tsipras said on Limnos island in the North Aegean on Thursday.

Greece “is coming out of a very difficult adventure on its own power and cleanly” after being led into it by “imprudent management that led us to bankruptcy,” he added

Tsipras, who after his address is heading to Lesvos for the regional conference of the North Aegean, said that Greece “will truly have left its adventure both when we exit the (loan) programs and when we can implement a program to support and strengthen lower social strata, the middle class, and all those who suffered in the crisis.”

Growth, the premier said, “must be based on three principles: (It must be) egalitarian, viable and just.”

On the island’s history, Tsipras referring to the Armistice signed at Mudros between the allied powers and the Ottoman Empire in 1918, signalling the end World War I.

The prime minister also spoke of Limnos-specific projects that would take place, in collaboration with local government, including a psychiatric ward for adult patients in the Limnos General Hospital, road works facilitating access to tourist attractions including specific upgrades at the archaeological museum in Limnos, improvements on the Myrina port, and sports facility construction or upgrade at three local communities.