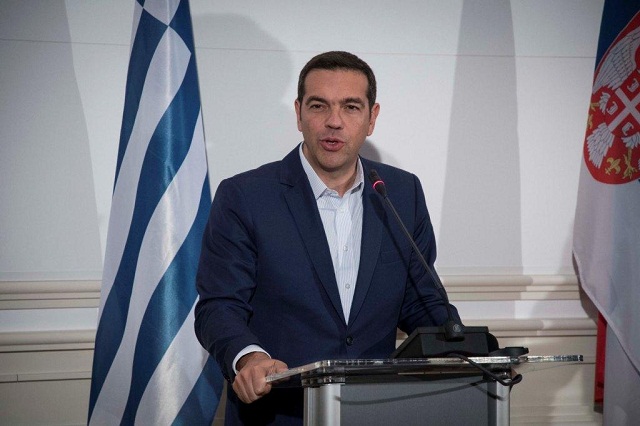 “We support with all our powers tackling religious extremism and terrorism. We support promoting peace, stability and security,” he said.

“We are struggling to make this an issue for the whole international community which is why, through our active role and action in all international fora, we encourage taking drastic diplomatic and economic initiatives in this direction,” he added.

Tsipras aid Greece cannot remain silent or absent in the presence of challenges affecting the wider region which are increasingly affecting Europe and its core, adding that the country is exercising an energetic, multi-dimensional foreign policy which allows it to utilize its geopolitical position, promote peace and stability and open channels of communication.

“Greece insists on the values of humanism, solidarity and tolerance even in the most difficult times as we proved during the refugee crisis, when Greece shouldered the weight of humanity,” he said.

The conference, which is an initiative of the foreign ministry, is “proof of the important role played by Greece in the wider region, highlighting once again our country’s long-standing culture of dialogue, solidarity and active participation in solving global and regional crises.”

Tsipras said Greece is the only country of the EU and NATO which is also located in southeastern Europe and experienced the consequences of conflicts through the refugee crisis.

“We know, therefore, very well how important it is to maintain the religious and cultural pluralism in the Middle East for the future of Europe. And the other way round: How important it is for Europe to contribute to peace and stability in the Middle East with determination, but also on the basis of international law and democratic and humanitarian values,” he added.