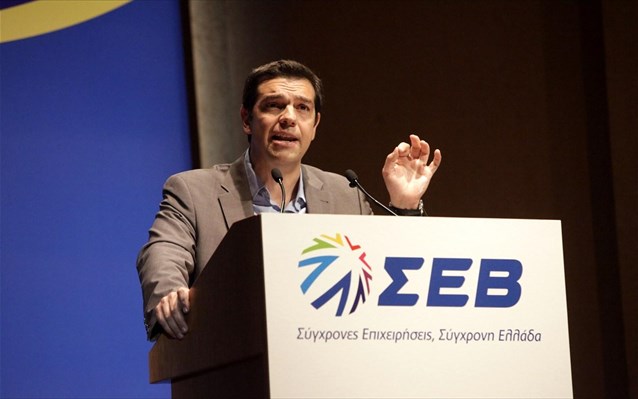 Greece and its people and economy went through hard times, but are rebounding, Prime Minister Alexis Tsipras said in an address at the Hellenic Federation of Enterprises (SEV) annual meeting in Athens.

“We managed to change the image of the country decisively,” he said at the Athens Concert Hall. “Greece does not comprise a systemic threat to Europe. (…) From being a pariah, Greece has become an example of political stability and recovery,” the premier added.

Tsipras said the government was prepared to resolve all outstanding issues related the fourth review by its creditors (institutions) before exiting the bailout program in August, and called on institutions for debt relief “as a show of actual trust in us and recognition of our efforts.”

In terms of elections, he said they would be held at the end of the government’s term, and he criticized the opposition for “its constant election talk.”

Greece, he said, was a pillar of stability and security in the SE Mediterranean and the Balkans, and he added that the government handled negotiations with FYROM, among other issues, “with a sense of responsibility and patriotism.”

“Our country, our society, and our economy survived through hard times and is now rebounding strongly,” Tsipras said.