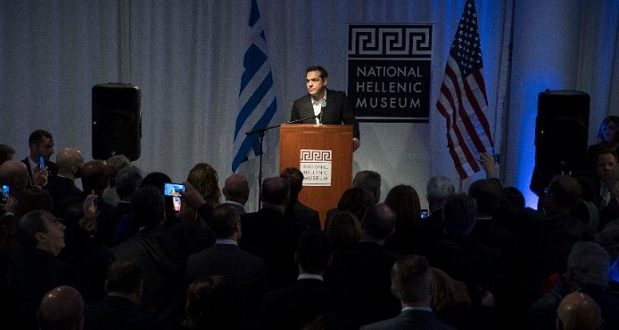 Greece has returned to growth, leaving behind it the crisis and the economic model that led to it, Prime Minister Alexis Tsipras said on Monday in his address at the Chicago Council on Global Affairs.

“Today, Greece is finally coming out of a severe, deep recession that lasted more than 7 five years, cost a quarter of its GDP, resulted in 27% unemployment and led to an enormous brain drain of our most qualified young professionals,” a recession that was combined by the biggest refugee flows ever seen in Europe, since WWII, coming to Greece, he said.

“Greece is back” to growth, he said, “leaving behind, not only the crisis, but also the economic model that led us to it, the practices of the past that contributed to inefficiency and corruption.”

Bringing in examples of the country’s economic improvement, Tsipras referred to its growth over two consecutive semesters and the forecasts of its future (2% of GDP in 2017 and 2,4% in 2018), its achievement of primary surplus results in the last two years that exceeded targets, and the completion of the first successful refinancing of the debt through the capital markets.

Industrial production, investments, incoming tourism and exports were up – “Greece has nearly double the exports of the US than vice versa,” he noted. The unemployment rate decreased by 5,4% between 2014 and 2017 and was expected to be down 7,4% by next year, he added.

“Of course, all this did not happen by accident,” PM Tsipras said. “We applied a very demanding package of reforms (over 400 actions) in our tax system, product markets, judicial system, health and social care and energy sector, as well as the business environment,” and enforced necessary legislation.

He summed up the government’s goal as being “a sustainable growth model that gives priority to innovation, is export-oriented, investment-friendly, makes full utilization of Greek highly skilled human capital and is socially just.”

In promoting Greece’s advantages for American investments, Tsipras said that some of the reforms applied included the following:

– The 2016 investment-incentives law, which aims to generate more than 13 billion dollars in private investment by 2023 (including a stable corporate-income tax-rate for 12 years)

– The fast-track procedure for strategic investments

– The creation of a new state development bank in 2018

– The promotion of a strategy on fighting unemployment

“Greece is the only country that has promoted a comprehensive active diplomatic agenda for stability and cooperation in one of the most important but also unstable regions in the world,” the Greek premier said, pointing out Greece’s long-term membership inthe European Union and NATO, and promoting the defence cooperation with the United States, among other ways by providing Souda Bay as a naval and air force base.

Greece’s diplomatic efforts with FYROM and Cyprus and its economic cooperation in the energy sector (oil and natural gas), and the promotion of major infrastructural projects in Greece, were further proof of Greece’s growing importance in the Mediterranean area, Tsipras said.

The PM made special reference to Turkey, saying that Greece had not given up on Turkey’s European membership, despite the difficulties in their bilateral relationship.

Greece’s geopolitical stability was an attractive factor for American investments in Greece, which should focus on the fields of tourism and real estate, energy, infrastructure, new technology, agribusiness and the financial sector, he said, and could include “important joint ventures in third countries like the one General Electric recently concluded in Libya together with a Greek company.”
Greece “can only remain the regional pillar of stability and security if its most fundamental security concerns in the Aegean and the Eastern Mediterranean are met,” he said, either at the diplomatic level or through military procurements, or both.

“As a leftist,” he concluded, “I prefer the first rather than the other two.”